Charles Jock is famous in the running world for his front-running style. On multiple occasions, Jock has taken the pace out in under 50 seconds on the first lap of the 800 meters. Jock won an NCAA title his senior season at Cal-Irvine and was the runner up his junior year. Jock also qualified for the 2011 World Championships by taking third at the 2011 USA outdoor championships in the 800m. Jock now has an endoresment deal with Nike. We asked him about how he came to his race strategy and also how athletes can push themselves to reach their full potential. 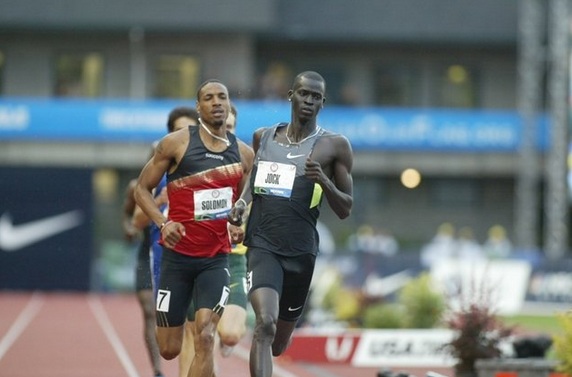 You are well known for running from the front. How did you find that you ran best that way? Did you experiment with different strategies or have you always run that way?

Running from the front requires a lot of mental toughness and was definitely not my first choice for a racing strategy. As a high schooler, I was all about the sit and kick. I perfected sitting in the middle/end of the pack and then surging the last 100m of the race (examples being the 2008 California State Championships and the 2008 Nike Outdoor Nationals). It wasn’t until my very first college 800m race when I followed a pacer who took the pace out too fast that I discovered that it was easier for me to hold a faster pace than to even or negative split.

One thing that a lot of people struggle with in running from the front is staying tough once they have been passed. You have run some of your fastest times and most impressive times even after being passed. How do you stay tough and focused and not tie up when that happens?

This is something very interesting that even I still struggle with sometimes. No matter how experienced you get it’s always tough to get passed during a race but the only remedy to this is more racing experience. I know, it sounds like an anomaly but the truth is the more you race, especially from the front, the better you get at dealing with the pain, having a chase pack that’s eventually going to try to pass you, and motivating yourself to push yourself all the way to the finish line. A lot of this comes from believing in yourself as an athlete, believing in your training, and believing that you and your coaches have done everything you needed to do up to that point in order to perform at your best that day which makes it easier to stay patient and relax. Confidence is the biggest key to success on the track!

While you were in college, you ran much faster times than some of your teammates. How did you develop into the runner you became even without teammates always next to you in workouts or races?

I’ve always been very self-motivated and able to push myself hard without any outside influence. It wasn’t very hard for me to carry that mentality over to track practice. Knowing that I one day wanted to be an NCAA Champion and an Olympian, I had a deep understanding of how much work was required, how much self-motivation, and how much dedication and drive.

You and your coach have a strong relationship. Why do you think it is important to have that kind of relationship and trust with your coach?

I believe having a great relationship with your coach is one of the most important factors to success in track and field. Your coach is like your partner, you have to trust them, you have to buy into the system, you have to believe that their plan is the best plan for success. As an athlete your only goal should be to show up and practice or compete. I’ve always gone by the philosophy of “Coaches coach, Players play and Cheerleaders cheer”. Everybody has their role and although some are intertwined, the less things you’re stressing about, the better you will perform. Trust that your coach has the best plan for you and has done everything in their power to get you in the best shape they can and you will be more confident during competitions which as I mentioned before, confidence is key!

Did/do you have any running heroes? What have you learned from them in running that you hope you are incorporating?

I’ve never really had any running role models but I do have people I respect for their accomplishments. Top among these athletes is the current World Record Holder in the 800m, David Rudisha. It’d be really hard to not respect someone who utilizes the same race tactics I do but at a much more advanced level. Rudisha has shown he can easily control the pace from the front whether it’s fast or slow and can easily win either way. Knowing how tough one has to be to accomplish what he’s accomplished, I respect his excellence as an athlete and his drive and commitment as an individual.