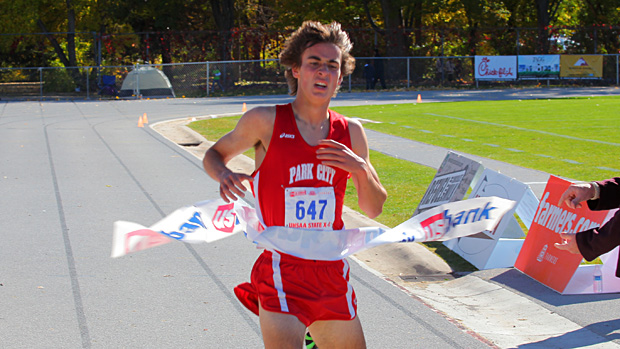 Ben Saarel crosses the finish with the second-best Utah 3A state time in history. Photos by Kyle Perry.

Editors Note: Kyle Perry, the author and photographer for this article, is a person whose name many of you will instantly recognize and also a name that you will start to see more of on this site in the very near future. Please welcome Kyle Perry to MileSplit Utah!

In the 1a girls race Whittni Orton of Panguitch took the lead very early and never looked back. She placed first with a time of 19:18. Orton was followed by Lyna Garcia of St. Joseph, and teammate Catania Holman rounded out the podium. Her victory helped propel Panguitch to a convincing team title as well.  Panguitch won the team title over Wayne by a score of 35 to 59. St Joseph was right behind Wayne with 66 points

If you came hoping to see a close race, this was the one to watch. Lydia Foster of Richfield led the race early, but Grace Shulz, Emily Sundquist and Olivia Moyle followed in close order. Each runner took their turn in the front, but in the end Schulz pulled away to win by 4 seconds. Sundquist was second and Moyle was third. The team competition was not as close as the individual race. Rowland Hall  put 3 girls in the top 10 and won by 20 points over Enterprise, 61 to 81.

The 3A girls race proved to live up to the hype as the teams from Ogden and Park City matched up very nicely. They took a different approaches to the race as Park City got out hard with all 7 girls in the top 20 at mile 1.  Ogden went out more conservative, but still in sight of the Miners as they crested the biggest hill of the day near mile 1. Then the Tigers began to make up points. That effort, however, would fall short, as Park City’s first three finished 3rd  4th and 5th, sealing away the team title. The margin of victory was 36 points to Ogden’s 44.
In the individual race, Aimee Bryson of Cedar ran a very smart race. Sitting right behind the leaders from Park City and Ogden for most of the race, the 400 meter specialist proved she has great range as she came from behind to win by over 13 seconds.  Sarah Feeny of Ogden was second, while Annie Orr, Ali Walker and Alyssa Snyder of Park City rounded out the top five.
For the record, the Park City girls posted the top team time in any classification. 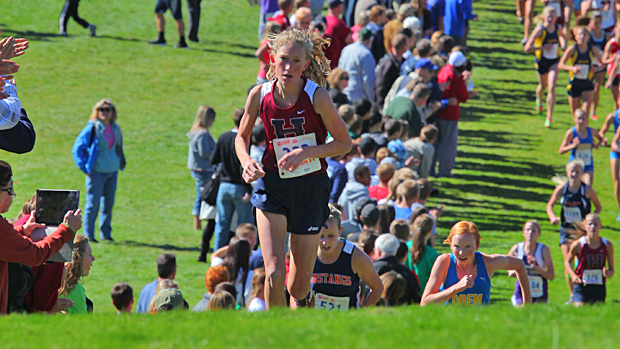 Lucy Biles of  Herriman HS took the lead very early in the race and pulled away for  a dominating individual title. She won by an almost unbelievable span of 25 seconds. Miranda O’very was likely okay with her 2nd place finish as she led her Mountain Crest Mustangs to the largest team victory in any of the divisions. Orem held off Skyline for second on the back of a 3rd-place finish by Summer Harper.

Davis was a heavy favorite and they lived up to the billing. Donning Neon yellow uniforms, it was easy to see that they had their whole team up front early. American Fork put themselves pretty far back in the pack and couldn’t make up the gap. Davis tired late in the race, but was able to hang on for the team title. Individually Emily Rich ran the smartest race. Rich sat in the pack until the final half mile or so, then pulled away for a dominant win with a time of 18:01. In second was Tavia Dutson from Jordan who moved up 4 spots late in the race to claim her place. Ellie Child of Davis took third.
1A Boys
In 1A boys the lead group was small from the start. Dylan Lindsay of Altamont led at mile 1 followed closely by Colby Spencer of Valley HS, Ethan Young of Milford and Zach Johnstun of St. Joseph. By mile 2, Colby Spencer has taken the lead from the pack and never looked back. Spencer (16:34) won by diving under the finish banner followed by Young (17:05)  and Kyler Norris (17:09) of Panguitch finished strong to round out the podium

Proving once again that their 4th and 5th runners are hard to beat, Richfield used depth to grab the victory. Led by Caleb Monsen, only 58 seconds separated the top 5 of their team. North Summit looked strong up front in the team competition but maybe didn’t have the have the depth that they needed to hold on for victory. They were beaten for second by Rowland Hall, 90 to 98.
In the individual race Caleb Monsen Led the pack at mile 2 with Ryan Westerman and Eli Oftedal of Rowland Hall right behind. In the end Westerman would get the individual title (16:34) followed by Monsen (16:47) and Caleb Zwahlen of North Summit (16:51)

Ben Saarel of Park City came in to this race nationally ranked and a clear favoirite for the win. He was in the lead pack from the gun. Making his move near the halfway mark, he never looked back. Finishing strong and recording the top time of the day for all divisions, he missed the 3A boys meet record by only two seconds. The record of 14:54 is held by Luke Puskedra from Judge Memorial HS.  Saarel was followed by Jordan Cross of Ogden and Michael Finch of Pine View. In the team competition the door was open for whoever wanted the title. Ogden won the title by a ways as no one else could match the Tigers' depth. Wasatch was second and Desert Hills third.

Leading up to the race there was much intrigue as to who could grab team glory. There was no clear team leader early as everyone kept pretty close together through the first mile. Of the two teams that would emerge on top, neither team was in the top five  at mile 1. By mile 2 things were spreading out more as the individuals fought for glory. In the end Jacob Heslington of Timpanogos ran the most tactical race. He was very patient and let others do the work early, and  then finished strong holding off Jerrell Mock of Logan by less than a second. Conner Mantz of Sky View was third. The team victory went into the XC version of extra innings as Herriman and Bonneville tied at 68 points each. The tie breaker goes to the higher placing 6th runner and Herriman pulled out the victory. Mountain view, Timpanogos, and Orem Rounded out the top 5 teams.

The 5a boys race had some expectations going in with two nationally-ranked teams in the field. Davis, donning their white and gold, led the race early, placing six runners in the top 12 at mile 1 including 1st through 3rd. American Fork had their top 3 right with the Darts as they crested the hill near the 1st mile, and joining them was Alta’s Kramer Morton. By the second mile the Cavemen had moved into striking position. Showing why they’re ranked 3rd in the US, they had 6 of their runners in the top 10. At this point the Cavemen looked as though they would earn the team title with ease and fight it out with each other for the individual title, but Alta’s Kramer Morton had other plans. He used a hard charge in the last 800 meters to overtake the leaders and pull away for the win.  His time makes him the fastest runner in Utah 5A history at this meet. Brayden McLelland was second as American Fork placed 2nd, 4th, 5th, 7th and 11th to capture a convincing victory. Davis was second, with Riverton in third. Bingham and Alta Rounded out the top 5.
Photo Albums from All Races to Follow Tonight
Tweets by MilesplitUtah