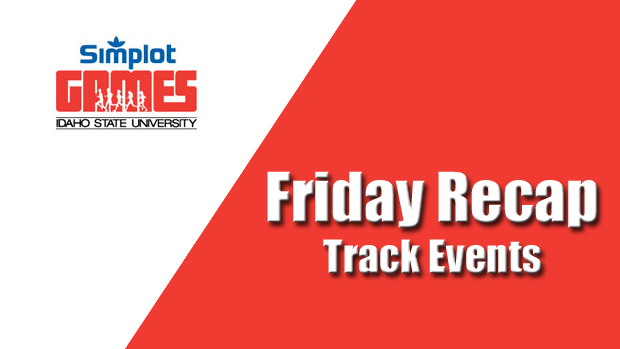 Friday’s events saw a lot of great competition. With finals in a few of the field events and more prelims in most other events, here we will break down which Utah athletes moved on to the finals.

In the Boys 60m Hurdles, Cam Dopp of Woods Cross was the top Utah qualifier. He cruised to an 8.32. Joining him the next round will be Jaxon Worthen of Titan Track Club (Syracuse) and Conner Jensen of Bountiful.

In the Girls 60m Hurdles Nicki Laws of Provo was the lone Utah girl to advance to the final. She posted a 9.26.

In the boys 60m Dash, Seth Fortin of Davis High posted the top qualifier for a Utah athlete, and the 3rd fastest time overall. He posted a 7.06 and will move on to the next round tomorrow.  Sean Barton of Woods Cross was just behind at 7.14 and his teammate Jacopo Spano also got  qualifying mark at 7.24.

In the Girls 60m Dash Fatou Trawally was the top Utah athlete, though she was unable to make the finals in the event.

Jacopo Spano of Woods Cross will have double duty tomorrow as he made the final in both the 200m and 60m. His time in the 200m was the 2nd fastest overall for the day.  Parker Landgen of the Mercury Track Club in Salt Lake also made the finals.

In the Girls 200m dash Brenna Porter of Sky View Advanced to the final with her time of 26.88. Megan Elmont of Maple Mountain was the 2nd fastest Utah Athlete but was not able to reach the final.

The Boys 400m Dash went pretty much the same as most every indoor meet this season, with three Utah Athletes posted marks to get them to the next round. Brandon Walker and Clay Lambourne of Riverton both advanced as well as Cam Dopp of Woods Cross. Michael Bluth of Riverton barely missed the finals but Riverton will still be well represented.

Lauren Baxter was missed in the 400m dash as she had a legitimate chance of winning the entire meet. In her absence Jill Richardson of Woods Cross will have to represent Utah single handedly in the final.

8 Utah athletes will be running in the finals tomorrow, with the fastest qualifiers coming from Isaac Faux of Maple Mountain and Jackson Sagers of Davis finishing separated by only .12 seconds.

In the Girls 800 Shea Martinez cruised to the top qualifying mark by two seconds. She will be joined by teammate Taylor Cox, Avery Calton of Ogden, as well as Brookayla Nelson and Tori Parkinson of Top of Utah track club,

The Boys 4x200m relay resulted in two Utah teams advancing. Mercury Track Club and Woods Cross will both send their teams to the finals .

In the Girls 4x200 Davis posted the top time but failed to advance.

Riverton Boys have a pretty stacked 4x400 and they advanced to tomorrow’s final. They will be joined by Davis and Alta.

Along with the three teams that advanced in the Boys 4x400, three more girls teams will be competing. Davis Girls, Northridge, and Woods Cross all advanced.

Mercury Track Club has some great talent to turn to for the relays as they were second in the qualifying and will be fighting for a win tomorrow. Davis High has put together some very impressive relays this year, and again tonight they advanced to tomorrow’s finals with ease. Right behind Davis was Maple Mountain.

In the Girls Sprint Medley Salem Hills was the top qualifier with Woods Cross and Davis right behind.