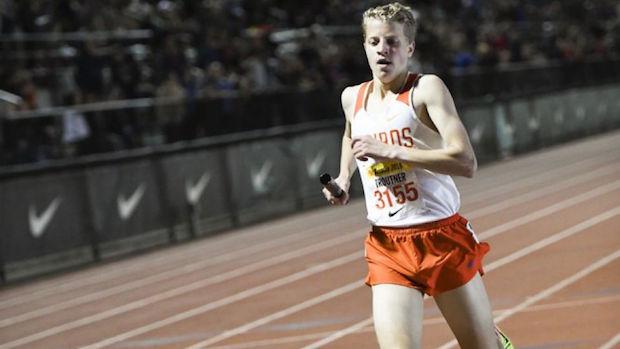 Aidan Troutner anchored Timpview to a 3rd place finish in the 4x1600 on Friday night at Arcadia. (Photo by Lizzette Adams)

A small, but talented group of Utah individuals and relays traveled to the Arcadia Invitational this past weekend in California. While there was no event winners, the state saw many athletes and relays have high finishes and run some incredible times dropping down to sea level.

The boys 3200 was the featured event as always, which Utah was represented well with 3 boys breaking 9 minutes including Lehi's Ryan Raff in 8th place with a time of 8:54, while the Springville duo of Brandon Garnica (11th, 8:57) and Grant Gardner (13th, 8:58). Few states have just one sub 9 minute two miler, but Utah had 3 in one race!

Nike Cross Nationals champion Aidan Troutner went in as one of the top race favorites, but struggled to a 22nd place finish in 9:05. Troutner may have been feeling the effects of running a strong leg for the Timpview boys 4x1600 meter relay on Friday night as they finished third place in a loaded field with a time of 17:37. Finishing just four seconds behind them in fourth place was Lone Peak (17:41).

East High School junior Will Prettyman got an opportunity to face off against some of the nation's best sprinters in the 100 and 200 meter dash. He clocked a state leading time of 10.67 for 4th place in the 100 meter dash, while the current state leader in the 200 meter dash finished just off his season best in 8th place at 21.77.

Provo's Meghan Hunter was one of top girls individual stars from Utah. Hunter finished 4th in the invitational 400 meter race with a time of 53.79, which was just a few tenths of a second off her state leading season best from the UVU Invite. 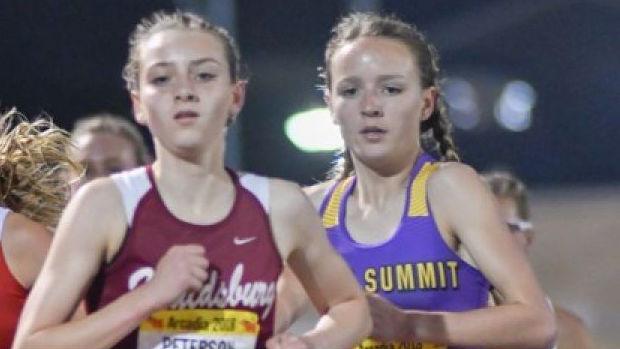 Sadie Sargent was just off a new PR at Arcadia with a 3rd place finish of 4:53 in the invitational mile. (Photo by Clark Kranz)

North Summit's Sadie Sargent scored the highest individual finish of the meet though as she rolled to a third place effort of 4:53 in the invitational girls mile field. It was only a second off her PR of 4:52 from a victory at the Simplot Games this past indoor season.

The Cedar girls became the first 4x400 meter relay team in the state to break 4 minutes this spring as they finished 4th in their division of the relay event with a state leading time by 6 seconds at 3:58.77.