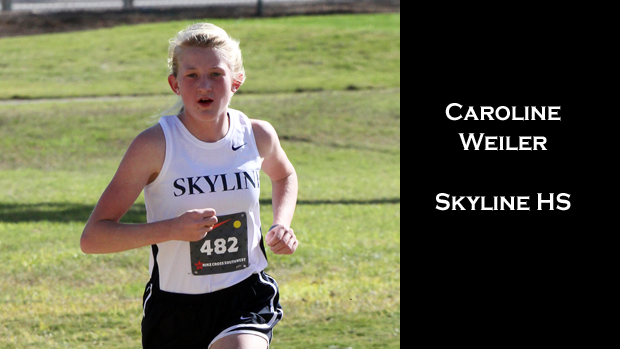 Skyline was very strong last fall until an untimely injury struck. This year, the Eagles figure to be very good once again with Caroline Weiler figuring as one of the key pieces to the puzzle. Photo by Alan Versaw.

Advance Disclaimer: Due to some irregularities in collection of race data from the fall of 2011, I'm not entirely sure I have a very good handle on years of graduation for a handful of the athletes in this classification. Please feel welcome to let me know if I've included any athletes in this analysis who have already graduated.

Last year, Skyline got a great start on their season but had a wheel or two come off the bus following the Bob Firman meet. That created opportunity for some other schools that might not otherwise have been there. Mountain View was the most opportunistic team in the field and converted that opportunity into a state championship last fall.

But, this fall is a new season. While Mountain View can more or less always be counted on to be a contender at the end of the season, their position entering this season has been weakened somewhat by graduation. They will have something to prove, and Amanda Turnbull's track season says she's the one to lead the way in that mission.

A quick look at returning runners from the top 50 of last year's state meet (a question mark means I know no year of graduation whatsoever on record for the athlete in question) shows the following athletes coming back:

With Summer Harper and Candace Greenwood in the fold, Orem looks like a strong entry. It doesn't hurt at all that they were able to bring a couple of sophomores to a competitive level this spring as well. Count Orem in.

You can scarcely help but notice Herriman's success in the 3200 this spring, with Jessica Robertson, Kami Hartley, and Lucy Biles each ending the season at 11:40 or better.

Woods Cross should also be fielding a nice cross country team this fall, based on the track seasons turned in by Millika Holbrook, Kacie Anderson, and Amanda Evans.

Skyline's track season didn't match the success of their cross country season, but they were out there, depositing miles into the cross country bank.

Mountain Crest, following the lead of Miranda O'Very, gets three sub-12s back, and another at 12:42. That is the start of a very competitive cross country team there.

In short, there should be no shortage of contenders for the 4A girls title in just under four months. Several teams are well positioned to make a serious bid for top honors and no one team holds a clear advantage over the others.

For those looking for further clues, this spring's rankings of returning 1600 runners yields a few more pieces toward answering the question of who made the most progress during track season:

4A Girls 1600 Meter Rankings (returners only)

We see a few names popping up there that didn't show under the 3200 rankings and missing those names could lead to some faulty assessments of the relative strengths of the top teams heading into the fall. I suspect, however, the net result is to further muddle the picture of who is the top team heading into the season. Take your pick, hang around four months, and see what happens!