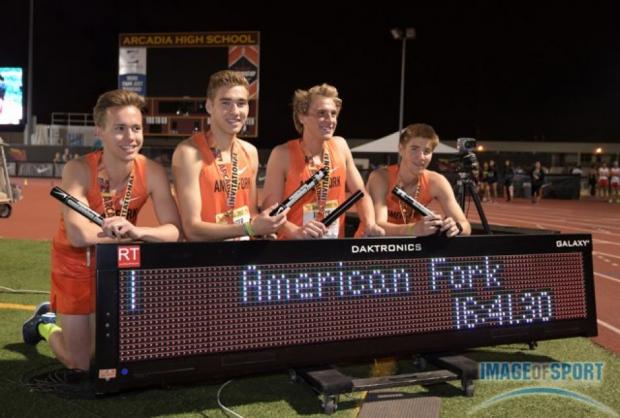 When I spoke with the American Fork boys a few weeks back, they made known their intention to take aim at the national 4x1600m record set by 2015 NXN Champions-- Great Oak High of Temecula, California. While the top three runners from American Fork were a known quantity going into the Friday's race, there was some question about how young Carson Clinger (a sophomore) would handle the pressure of the record attempt.

Whatever questions may have existed, the younger Clinger put them to rest, showing a phenomenal amount of poise and patience that belied his age as he battled through the crowds as the lead-off leg for his team, ultimately handing off to McKay Johns 4:25.5 into the race. Johns, like his next two relay-mates, started his leg off aggressively and quickly took the lead of the race. Once away, Johns cruised to a 4:08.2 split and handed off to Patrick Parker, who increased the pace and battled to a 4:05.4 1600m split despite having to navigate through and around some of the runners from slower teams in the Invitational race. About 12:40 into the attempt, and needing only a 4:13 split to write his team's name into the record books, two-time NXN individual champ Casey Clinger fumbled--and then secured-- the baton and took off. Leaving little doubt, Clinger the Elder dropped an amazing 4:02.1 split and, in the process, helped punctuate his team's unparalleled performance.

While much has been said about the impressiveness of having the final three legs average a blistering 4:05 pace, I can't help but shine a light on the impressiveness of young Carson's performance. Heading into the race, the young sophomore boasted "only" a 4:30.37 personal best over the 1600m distance. To be able to handle the pressure, the pushing and shoving, and the crowds in such a big race-- and to run a 5-second PR- -is an incredible feat and a testament to the maturity of Mr. Clinger and the preparation and training of his coach, Timo Mostert. Likewise, both McKay Johns and Casey Clinger ran personal bests for the 1600m during their legs, despite needing to cover the four laps in solo efforts.