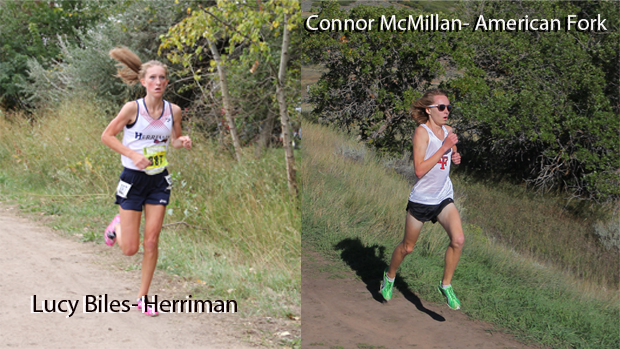 Connor McMillan, American Fork High School- Mcmillan earns the Athlete of the Week honors as he ran away from the field at the Wasatch Invitational on Saturday. The race was held on a very hilly course at Soldier Hollow, but the hills didn’t slow Connor Mcmillan down. Connor started the race out fairly conservative, and then in the middle of the race charged very hard and pulled away from Clayson Shumway of Lone Peak. He ended up winning by about 7-10 seconds, though I have not yet seen the official results with the actual margin of victory. All I can say is if you were there, you saw how strong he finished, and that he is the real deal.

Mcmillan leads the Cavemen of American Fork, who won the team title. They are ranked #1 in the SW region and could be even better than the team that was second at NXN last year.

Lucy Biles, Herriman- Biles earns Athlete of the Week honors after winning her second consecutive race, this time at a very stacked Bob Firman Invitational in Eagle, Idaho. Biles and her team made the trek to Idaho to race against some of the best talent in the surrounding states. She ran a smart race, along side Sarah Feeny of Ogden, and pulled away to win by 13 seconds over Feeny. The duo led a Utah charge that swept the entire top 10 in the race.  Biles Winning time was 17:57.

Every week, Milesplit Utah honors one male athlete and one female athlete of the week, based on high performance. The award is given to an athlete based on time, exceptional performance, a big win, a breakout performance, or whatever else merits the honor. When you feel someone deserves the award, send us your nomination by email to milesplitut@gmail.com