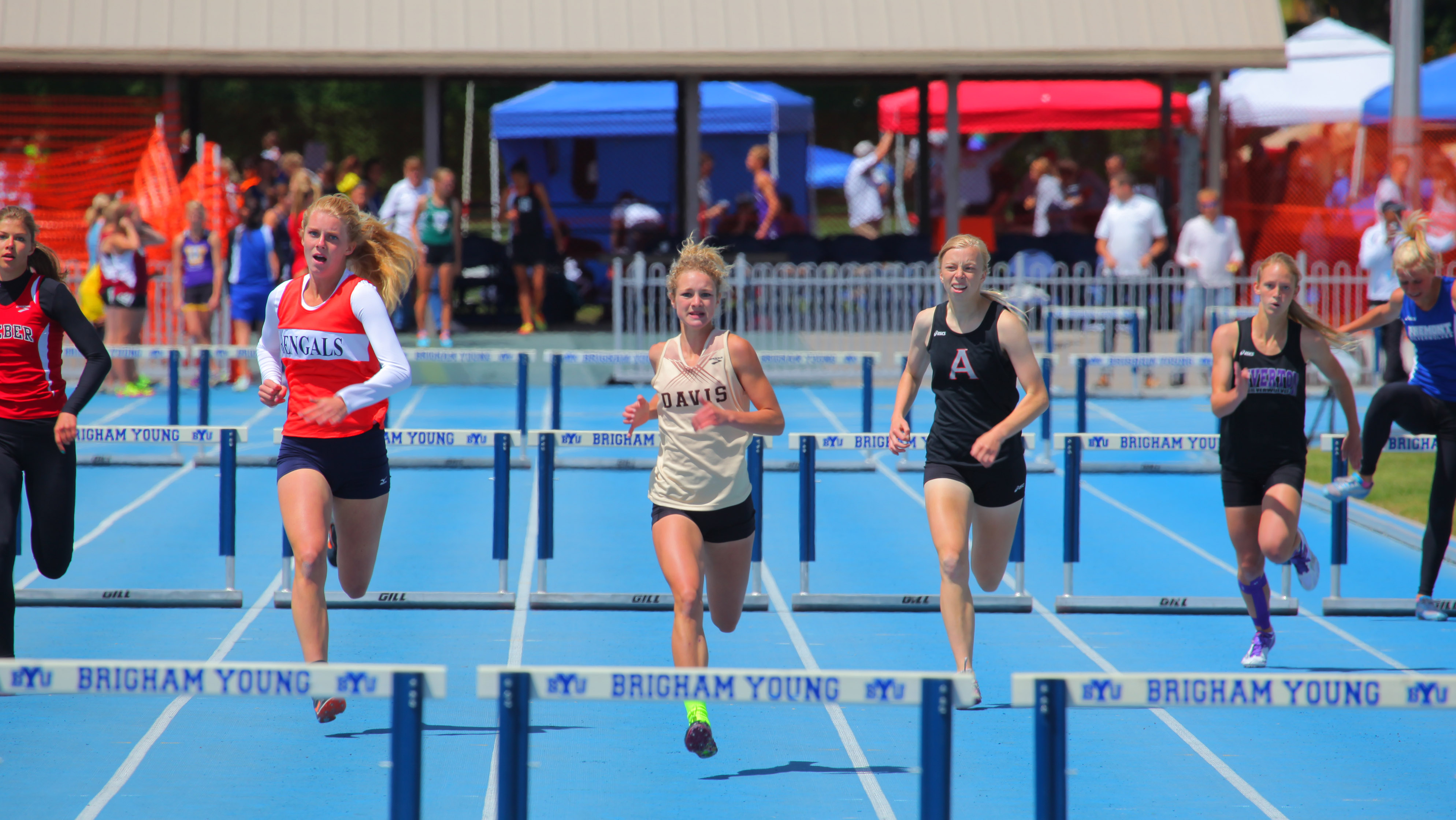 The Utah High School State Track and Field Championships concluded today in Provo. It was an exciting day of competition in every classification. The weather was bi-polar as it was pouring rain one minute and sunny and hot the next. The athletes seemed more focused on winning a state championship than they were about the weather. The team titles on both the Girls and Boys side went to Davis High School as the Darts made it a three-peat.  The individual events were exciting as well. Here is our event-by-event breakdown of the action.

Girls 3200m- The rain poured down as the lead pack of 6 athletes shuffled for the front position. With about 800m to go Emily Rich of Bingham and Ellie Child of Davis began to pull away as the pack strung out. Rich put in a consistent surge over the last 300 meters and pulled away from Child to win the 5a State Title. Her winning time was 10:52.90. Ellie Child was 2nd in 10:56.05

Boys 3200m- This was the “American Fork Show,” with Brayden Mclelland taking the lead pretty early and pulling away more and more every lap. He never looked back as he took the win while his teammate Connor McMillan was able to hold off a charging Andrew Brewer of Bingham to complete the 1-2 finish for the Cavemen.  McLelland won in 9:09.50,  Mcmillan was 9:21.62, Brewer was 9:22.42.

Girls 100m Hurdles- Tawnie Moore of Freemont ran a perfect race and raised her hand in excitement as she crossed the line. Her winning time was 14.80 over Alyssa Hirschi of Brighton was 2nd in 15.37.  Hirschi is only a sophomore and has a very bright future.

Boys 110h- It was a very tight finish that they had to go to the photo to determine the winner. Jaxon Worthen of Syracuse pulled it out over Mitch Mourdant of Weber.  They both got an official posted time of 14.96.

Girls 100m Dash- Bailee Carling of Davis pulled out the upset win over top seeded Kayla Ivins of Freemont. Carling’s winning time was 12.31 to Ivins’ 12.40. Desi Guerrero of Lone Peak was 3rd in 12.70.

Boys 4x100m- The race started off with a recall because of a slipped block in lane 5 (Syracuse). After the clean start, Davis took a dominating win over Alta with a time of 42.10. Alta was over a second behind at 43.24. Brighton was a close third in 43.31.

Boys 400m- There appeared to be a false start at the beginning of the race, but no athletes were disqualified. Clay Lambourne of Riverton took the win at 47.76 over his teammate Michael Bluth who finished in 48.07. Top-seeded Trevor Leavitt of Davis was third with a  time of 48.19.

Girls 300 hurdles- Christine Van Brocklin of Davis looked as though she was going to easily win it until the final 20m, when Alyssa Hirschi of Brighton put in a great surge. Hirschi’s lean for the line came up just short as Van Brocklin got the win in 44.65 to Hirschi’s 44.67.

Boys 300 hurdles- Mitch Mourdant of Weber, who was painfully close to the win in the 110 Hurdles,  narrowly avoided disaster as he knocked over the last hurdle and won it with a time of 39.01. Nathaniel Maxfield of West Jordan took second with 39.28. The 110m hurdle’s champ Jaxon Worthon of Syracuse was third with a time of 39.98.

Girls 800m- It’s no wonder that Davis won the 4x800m national championship indoor. Through the first 400m they held the top 4 places. Shea Martinez led the pack coming through in a blistering 62 seconds. She maintained the lead and won with a time of 2:09. Taylor Cox was 2nd in 2:15.52, and Emily Rich of Bingham was able to move up to 3rd with a time of 2:18.27. Davis showed their depth as they grabbed 1st, 2nd, 4th, and 6th in the event.

Boys 800m- In a very congested 5A final, Davis had a strong pack up front with Andrew Brewer of Bingham and Nate Marchant of Jordan in the mix. As they moved down the back stretch Marchant and Brewer jockeyed for a way out of the pack. Marchant found a great hole on the inside and moved to the lead where he would stay for the final 200m winning with a time of 1:54.05. Brewer had a little more trouble getting out of the congestion and in the end could not make up the gap but was able to grab 2nd. To Brewers consolation, he did win the 1600m yesterday and also took 2nd in the 3200 today.  Kramer Morton of Alta also had a strong finish to place 3rd in 1:55.64.

Girls Medley- Davis has insane depth in all the events, but it really shows when they team up in the relays. As the 400m runners handed off to the 800m leg, Lone Peak dropped the baton adding an element of excitement. As the teams entered the last lap it was clearly a two way battle between Davis and Bingham as future BYU teammates of Shea Martinez and Emily Rich anchored their teams. Martinez finished strong as the Darts won with a time of  4:09.05 to Bingham’s 4:12.23.

Boys Medley- West Jordan got out to an early lead in first after the 200’s and was still in the lead after the 400’s, but they had a rough exchange heading into the 800’s. As the anchors entered the final lap Cottonwood took the lead with a big pack right behind. As they rounded the final turn 4 teams were still in it. Cottonwood, West Jordan, American Fork, and Davis fought down the home stretch. Davis pulled out another State Title with a time of 3:36.69.

Boys 200m- In the boys 200m Michael Bluth of Riverton was looking very strong but as they moved closer to the line Brandon Smart of Alta charged, pulling out a great win with a time of 21.67 to Bluth’s 21.72. This capped off a great weekend for Smart as he also won the 100m Dash earlier in the day. Seth Fortin of Davis was 3rd in 21.96.

Boys Pole Vault-Mitch Kalinin of Bingham has been the top vaulter in the state all season and won today clearing 14 feet for the win. He has almost cleared 15 feet this season so this event was obviously one the weather didn’t help with. His teammate Mitch Robinson grabbed 2nd at 13’9” and Ben Schulthies of West Jordan was 3rd at 13’6”.

Boys High Jump- The favorite in the event was Marcus Kemp of Layton. He lived up to the billing as he cleared 6’8”. His teammate Tyler Kendell cleared 6’7”. Cameron Call of Weber  and Austin Baker of Alta tied for 3rd  at 6’5”

Boys Javelin- State record holder Austin Kafentzis of Jordan won the meet with a throw of 179’. The rain on the runway must have caused problems for the throwers as he was 20 feet behind his state record. Mason Woodward of Syracuse grabbed a close second with a  throw of 177’5.25” and Jeff Whittaker of Davis with a throw of 176’10”.

Girls 4x400m- Entering the final event, Davis had already secured the team victory, so winning the 4x400 would just be icing on the cake. They led every leg of the relay, and ended up winning with a time of 3:57.36. Their winning team consisted of Taylor Cox, Ellie Child, Christine Van Brocklin and Shea Martinez. The victory also capped a 4-win weekend for Shea Martinez. Viewmont was second in the event with a time of 4:01.48 and Northridge was 3rd in 4:04.64

Check out the lap splits from the meet here