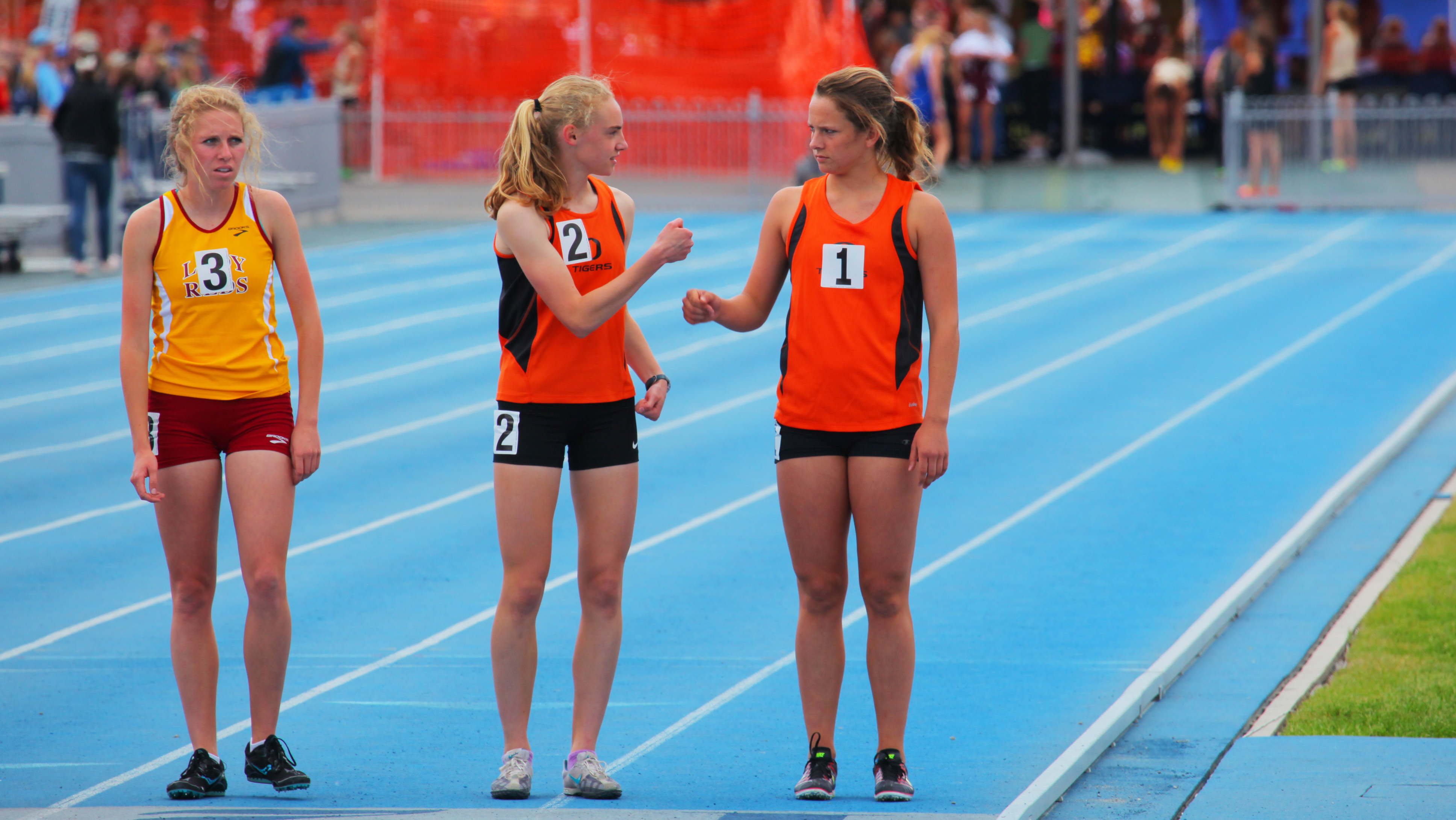 On a very rainy Saturday morning the final day of the 2013 UHSAA state track championships kicked off with the 3A Girls on the track for the 3200. After the race Park City team members could be seen calculating exactly what needed to happen for the Miners to secure a team title. Whatever those calculations were, they were spot on as the Miners won the state championship with 93 points over Cedar High School who grabbed 76 points.  Megan Glasmann was one big keys to Park City’s success as she won the Javelin and grabbed second in the Discus.

On the boys side of the competition it was Desert Hills winning the team title by a fairly good margin. Brad Wulfentstein helped the Desert Hills cause adding 20 points winning both hurdles events. Blake Kvarfordt added another 20 winning the Shot Put and the Discus. The 4 victories were the only individual champions Desert Hills had, as the rest of their points came from a strong balanced effort across the board.

Girls 3200m- Sarah Feeny wasted no time pulling away slowly but surely over Ali Walker of Park City. A Large group of Park City girls worked together with Kashley Carter of Juab as they battled for points for the team goal. Feeny pulled out the win in 10:40.60 with Ali Walker second in 10:58.51 and Kashley Carter third in 11:07.71.

Girls 100h- Kaitlin Walker of Wasatch cruised to victory in the 3A girls 100m hurdles final.  She won with a time of 15.23 over Julia Wheatley of Judge Memorial who crossed the line in 15.89. Alexa Goulding of Desert Hills was third in 15.92.

Boys 110h- Brad Wulfenstein ran a fantastic race, putting his head down the final 10 meters to grab every fraction of a second he could. He didn’t quite match his PR of 14.33 as he won with a time of 14.39, but he did pull off the win by nearly a second. Lukas Hildebrandt of Dixie was second in 15.20 and Therin French of Cedar was third in 15.23.

Girls 100m dash- Kayla Shakespeare won with a huge smile on her face crossing the line in 12.26. Whitney Wilcox of Bear River pulled out second over Chandler Weitzeil of Morgan, 12.50 to 12.56.

Boys 4x100- Stansbury claimed the win with a time of 43.14 over Desert Hills at 43.49. One of the main advantages to Stansbury’s race was having the 100m State Champion Dallon Diderickson anchoring the team. Ogden was third with a time of 43.90.

Boys 400m- Scott Callister of Canyon View barely took the win over Bren Durfee of Grantsville. Durfee had the lead up until 20m to go when  Callister surged for the line to steal the title. Their times were 49.86 and 49.98 respectively.

Girls 300 hurdles- Kaitlin Walker of Wasatch wins with a time of 43.45. She also holds the State Record in this event, which she set a few weeks ago at the BYU invitational. Finishing second behind Walker was Shalynne Seegmiller of Dixie with a time 46.06. Third was Shanna Foley of Cedar was third with a time of 46.49.

Boys 300 hurdles- Brad Wulfenstein of Desert Hills crossed the line first with a look of relief on his face. Jon Durrant of Wasatch took second place with 39.56 with third place going to Lukas Hildebrandt of Dixie with a time of 40.28

Boys High Jump- The Boys High Jump was very close as it came down to misses. Both Clearing 6’3”, Ty Fejerang of Ben Lomond got the win over Nate Lee of Wasatch because Fejerang cleared on his first attempt and Lee on his second.

Girls Long Jump- Abby Taylor of Desert Hills won the girls long jump with a leap of 17’9.75”. Alyssa Brown of Spanish Fork was second jumping 17’7” and Hailey Stevens of Grantsville was third with a jump of 17’2.25”.

Boys Long Jump- High Jump runner up Nate Lee of Wasatch came back to win the High Jump with a leap of 21’3”. Logan Smith of Delta was second with a jump of 21’ even. Lukas Hildebrandt of Dixie also jumped 21’ to grab third.

Boys Shot Put- Blake Kvarfordt of Desert Hills won both the Shot Put and Discus on the weekend. His winning mark in the Shot Put was 49’7.75” beating out Kole Davis of Morgan who threw 48’4.75”.

Boys Discus- Blake Kvarfordt won the Boys Discus with a  throw of 160’8.25”. His win here coupled with his Shot Put win helped propel Desert Hills to the team title. Kazden Jolley of Hurricane was 2nd with a throw 144’2.75” just beating out Ben Hicks of Juan Diego who threw 144’0.25”.

Girls Javelin- Megan Glassman was 8 inches away from breaking her own state record in the Girls Javelin with her throw of 155’10”.  Megan Hansen of Desert Hills broke up the Glasmann duo beating out Chrissy for second with a throw 120’3.25” with Chrissy placing third with a throw of 119’7.50”.

Girls 4x400m- Wasatch and Hurricane had a great battle the entire way with the rain beginning to fall just as they came down the finish stretch. Hurricane couldn’t quite match Wasatch’s strength as the wasps claimed the victory with a time of 4:00.39 to Hurricane’s 4:02.07. Park City was third with a time of 4:09.92

View Photos from the meet