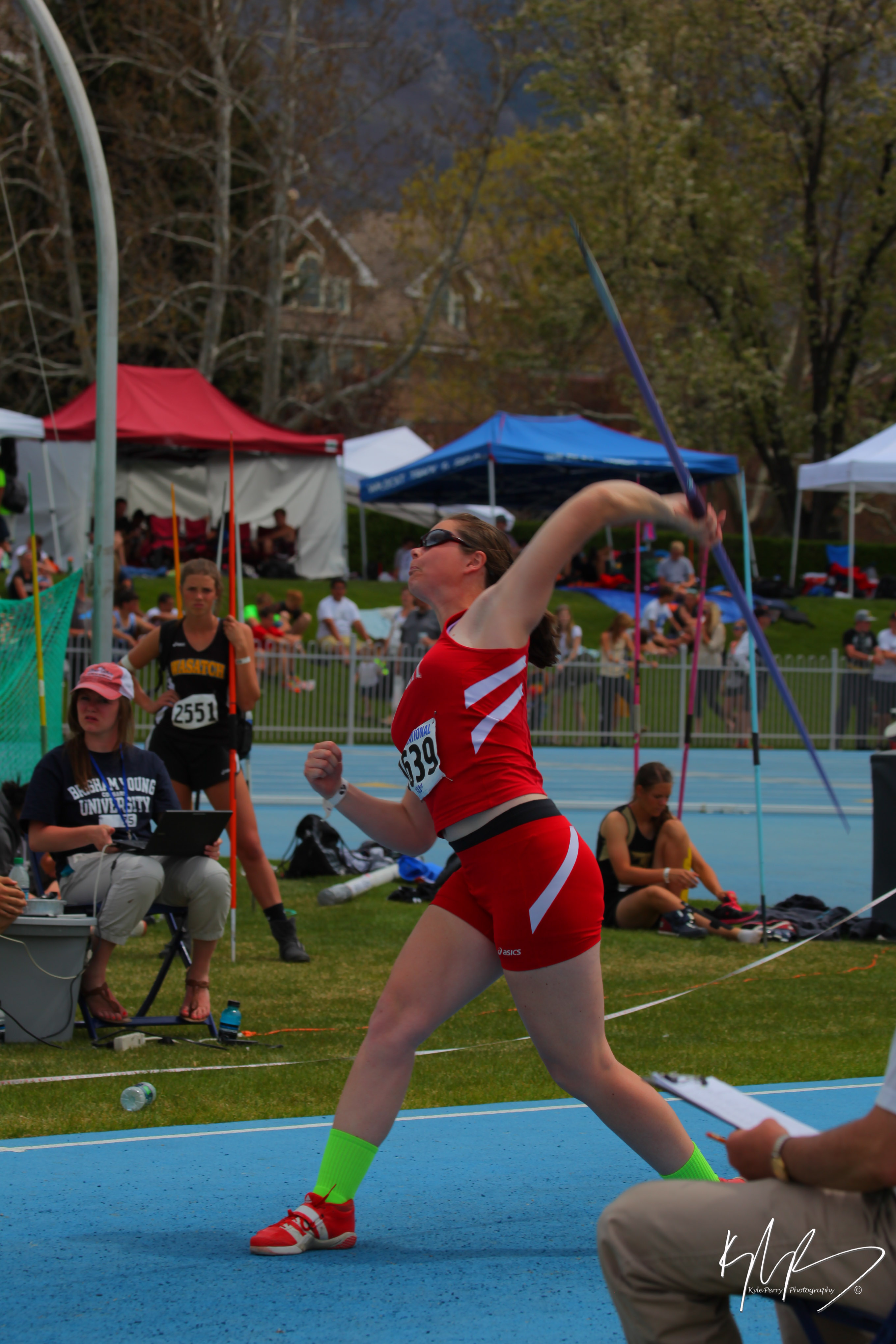 This past weekend in Provo, Brigham Young University hosted their annual BYU High School Outdoor Invitational. The meet is always a big producer of top marks, and this year the performances were even better than some expected, as state records fell in what seemed like every event on the day.  Some of the best competition came from Girls Field events, where every girl laid her best on the line.

High Jump- Audrey Muir of Union holds the top mark in the state this season, having already cleared 5’9”. Britten Duerden is just behind at 5’8”. On Friday Duerden didn’t let the rankings effect her performance as she beat out Muir for the win, clearing 5’7” and narrowly missing her season best mark. Muir finished 2nd clearing 5’5” along with Bethani Talbot of Copper Hills, and Jennifer Christensen of Granstville.

Javelin- (photo gallery) The Javelin is one of the deepest events in the state this year, with Megan Glasmann of Park City ranked 5th in the Nation, her very talented sister Chrissy also throwing well, and a pair of 2a athletes battling back and forth for the state record. Megan won again, which is no surprise as she throws nearly 20 feet father than the rest of the state. This weekend she reached 145’9” to beat her sister who threw 128’3”.

In the 1a-2a Javelin, Mandee Christensen of Manti set the state record earlier this season, only to have her mark beat just weeks later by Anden Lyman of Enterprise. The record still stands, though Christensen got the win over Lyman with a mark of 128’9”.

Shot Put- (Photo Gallery) Kassie Nagel of Morgan has had a great season and added more hardware to her collection as she brought home double gold on the weekend in the Girls Shot Put and Discus. Nagel won the shot with a throw of 42’0.25”.  Jodi Atui of Pine View was 2nd with a throw of 40’9” and Kira Gilbreath of Viewmont was 3rd with a throw of 38’11”.

In the 1a-2a Shot Put Lia LLi of Sugar Salem Idaho won and athletes from out of state took the top 3. Kaitlyn Rowser of North Summit was a close 4th with a throw of 35’9.25”.

The 1a-2a competition was even closer than the 3a-5a competition with only 2.5 inches separating the top 3.  Erica Richins of North Summit got the victory over Emeri Larsen of Millard and Mckale Simpson of San Juan.

Discus- Kassie Nagel brought home double gold in the throws winning the Shot and the Discus. Her throw of 129’2.5” was just a foot off her personal best. Kamesi Havea of Copper Hills was 2nd at 119’5.75” and Jessica Richardson of Davis was 3rd at 119’3”.

Pole Vault- Bethany Foster of Bingham helped complete the Bingham sweep of the pole vault as she won clearing 10’9”. Camille Crandall of Alta was second just one notch below at 10’6”. Ali Morris of Syracus was 3rd with a  mark of 9’6”.