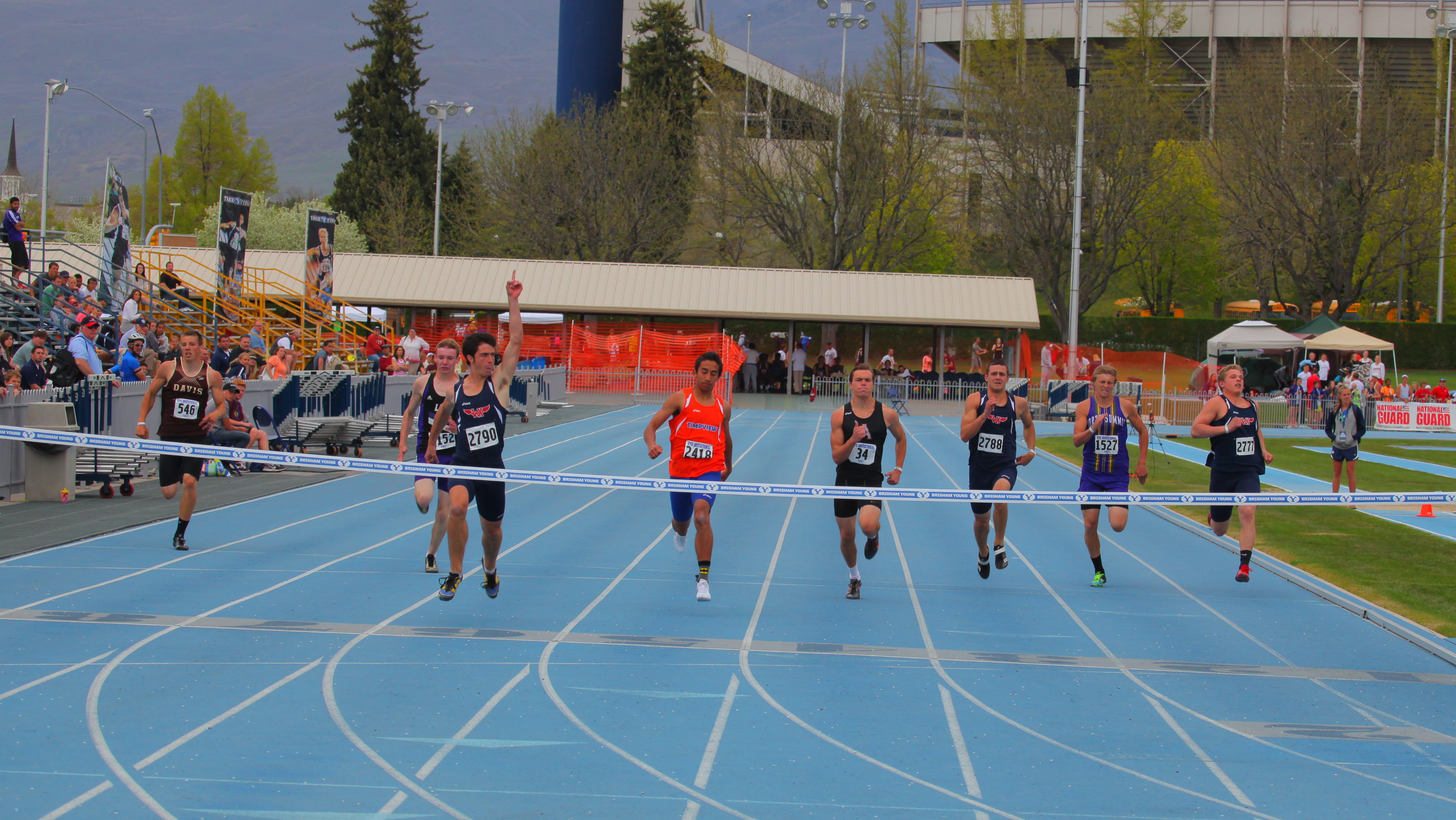 Boys 1600 Meter Run- The boys field looked very strong as most of the top athletes in the state were entered and looked to challenge for state records. Early in the race Conner Mantz of Sky View took the lead, corssing the 400m mark in 63 seconds. No one fell off the pace as Jake Heslington from Timpanogos led the group through the halfway point in 2:08. While everyone was still in the race as the runners approached the gun lap, Heslington had opened up a small gap. The gun was fired at 3:12 with the pack was 10m behind. In the final lap, Heslington opened up more space. With 200m to go he dropped the hammer en route to a 4:13 win. Ricky Faure of Rock Springs Wyoming was 2nd.

Boys 110 Hurdles- In the finals, Brad Wulfstein of Dessert Hills won by a full stride over Ammon Mitchell with a time of 14.35. In the second heat Liston and Kimball battled close in lanes 4 and 6 during. Liston had to win a tie breaker race off just to make the finals, and went on to win the second finals heat of the 110H.

Boys 100m Dash-  The Boys 100 was next up on the track.American Fork sprint star Jonah Trinnaman won the Boys final convincingly in 10.89. Derek Sorensen convincingly won the consolation heat in 11.23.

Boys 400m- Also enjoying the ideal weather conditions, Mika Mason from Richfield won the consolation heat in with a time of 50.13. Trevor Leavitt of Davis dominated the finals of the Boys 400m winning in 47.96, a stellar time. The closest competition was nearly a second behind. Leavitt 400m time leads the state of Utah this year.

Boys 300 Hurdles- Brad Wulfstein earned the double gold with the 300 Hurdles win in 38.73. Tyler Diaz of Westlake was second with a personal best time of 40.09.In an intriguing race where two athletes survived early race tumbles to finish, Brandon Thiroit won the consolation heat of the mens 300H in 40.86.

Boys 800m- Much of the buzz around the meet today was about the amazing 3200m yesterday which saw Ben Saarel of Park City smash the state record, and run what has to be the fastest 3200m ever run at altitude. Today everyone wanted to see Ben run. Saarel lined up in the Boys 800m with the intention of breaking another state record. Talem Franco of Wasatch had dreams of his own. With Ben going out in 2nd place over the first 200m, he came through 400 in 56 closely following  Franco.  Franco led at 600m as well, running a very gutsy and impressive race, but with 100m to go Saarel made his move. Down the final stretch Ben pulled ahead, winning in a state leading record time of 1:51.91. This is a new 3A state record and a mere 2 hundreths short of the record of the overall record. Franco held on for a strong second in 1:52.96. They were not alone with their blazing fast time; they led five runners to sub 1:54 times. For anyone new to track and field or mid distance running this type of performance is extraordinary.

Boys Sprint Medley- After the 200m legs American Fork had a convincing lead, and their 400m runner only added space to the gap. As they handed off to Brayden Mclelland, todays 1600m champ Jake Heslington got the baton in 5th for Timpanogos and put chase on Mclelland. With 1 lap to go American Fork had a 12 meter lead, but it was in serious jeopardy as Heslington closed. Mclelland used a great finish as he was able to hold on by the slimmest of margins winning in 3:31.91 over Timpanogos in 3:32.00

Boys 200m Dash- Winning comfortably, Jacopo Spano smashed the 4a State record with a time of 21.41, raising his right arm in celebration before even crossing the line. Spano was nearly three tenths ahead of Josh Espinoza, who had set the state record only yesterday. In the consolation of the boys 200m, Nick Edwards won in 22.28 by nearly two strides over his competitors.

Boys 4x400m- In the final track event of the day, the Boys 4x400m relay, Riverton looked as solid as ever. Only half a lap into the race it was clear they were the cream of the crop. In a heated battle for second, Alta passed Mountain View right before the second exchange.  By the third exchange Riverton had opening up nearly a 60m lead, which they only added to on the final lap winning with a time of 3:16.39, a new state record. Alta finished in 2nd with 3:25.44 while Mountain View came in third with a time of 3:25.95.