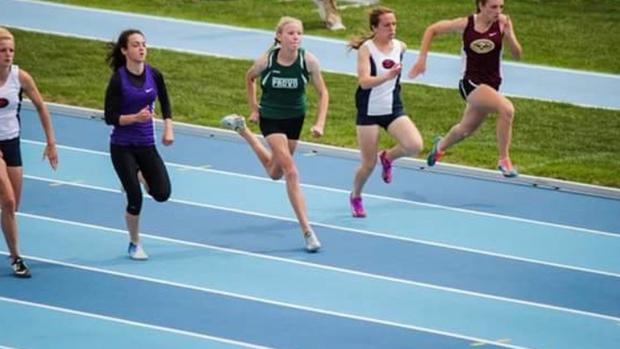 A false start was Provo High (UT) sophomore Meghan Hunter's introduction to championship racing a year ago at the UHSTCA Invitational Championships.

But it's something Hunter, who mistimed the gun on the 400m run, ultimately believes made her stronger.

"I think I was mostly just way too nervous for the meet," said Hunter, who will return as a championship hopeful at the Olympic Oval in Kearns on Friday and Saturday. "It was my third meet ever in high school. And I knew some people in the race. So I think I was just really nervous to race against them."

Better yet, she followed at the Great Southwest Classic in Albuquerque, New Mexico, and nailed a season-best PR in the 400m with a time of 55.77 seconds.

"She's definitely a better runner than she was last year," Provo head coach Miles Killian said. "She's a lot stronger, and she has experience that she didn't have a year ago."

Confidence could play a part in Hunter's return to the oval, which often yields fast times for incoming runners.

The sophomore is considered by Killian to be one of the "hardest workers" on the indoor team. During team weight lifting sessions, he said, Hunter is among the leaders, among the boys or girls, in any exercise that's performed.

"She just works harder than pretty much harder than everyone else and it shows," Killian said.

But Hunter's development has also contributed to her growth. She opened her indoor season at BYU on Jan. 14 by running a 57.94 second 400m, finishing first.

"There are a lot of things I still have to work on, like form and pacing," Hunter said. "But I think I got better at that toward the end of last season, and now I'm getting more confident and more experience."

Killian thinks Hunter can contend for a title in each race she enters on Saturday. If only, he says, because on any given day, "you never know what's going to happen."

But when it comes to Hunter, Killian also realizes there's quite a bit of talent, too.

"Knowing Meghan," he said. "She'll give us her all that meet."