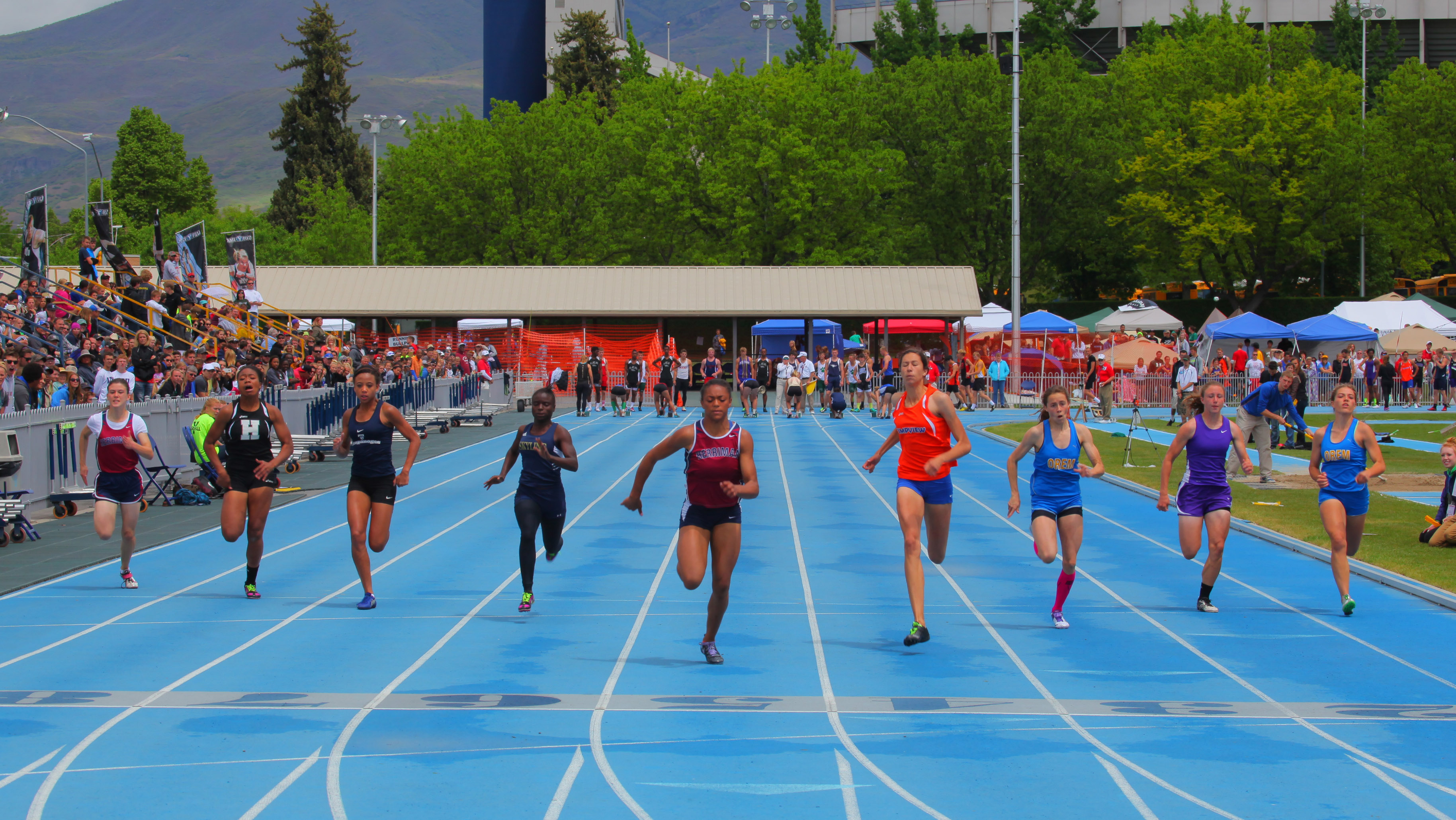 The Utah State Track and Field Championships concluded this afternoon on a rainy day in Provo. Woods Cross High School won the boys 4A team title in the final event of the day. The Wildcats, scoring 85 points, beat out Herriman who scored 79 points.

The Girls team title went to Herriman on the backs of great performances by their underclassmen Kaysha Love and Lucy Biles. The individual events were exciting as well. Here is our event-by-event breakdown of the action.

Boys 3200m- This was a very exciting race from the beginning. Connor Mantz of Sky View pushed the pace early on with Tomy Guitierez going with him. Jake Hesligton of Timpanogos sat back 15 meters or so and slowly bridged the gap. Jake took the lead with one lap to go and was able to finish strong and hold off Mantz with a time of 9:09.88 to 9:10.20. Gutierrez held on for third with a time of 9:16.90

Girls 100 hurdles- Brenna Porter of Skyview dominated, winning with a time of 14.51. Mindy Stapel of Springville edged out Nikki Laws of Provo, both in 14.73.

Girl 4x100m- Orem grabbed the win with a time of 48.81 over Herriman in 49.13.  Samantha Reeves of Orem was the anchor leg holding off a very talented freshman Kaysha Love of Herriman.  Love was the 100m Dash Champion earlier in the morning and is the state record holder in the 100m dash. Unfortunately for Skyline, it looked like their very talented sprinter Fatou Trawally pulled her hamstring on the final leg of the 4x100.

Girls 400m- Lauren Baxter of Timpview took a huge lead on the home straightaway and won, setting a new 4A State Record of 54.45. She ran the 100m dash earlier in the day which obviously didn’t slow her down at all. Sydney Bricker of Hillcrest was 2nd with a time of 57.07 and Cassidy Pinnock of Olympus was 3rd in 57.96.

Girls 300 hurdles- Brenna Porter of Skyview set the state record at in this event at the BYU Invitational two weeks ago, and she also has one of the top times in the country this year. She won the state championship today with a time of 42.02. She was a half second behind her record time, but still won by more than 2.5 seconds over the field today. Mindy Stapel of Springville took second place with a time of 44.76. Ariana Williams of Hillcrest was 3rd in 45.54.

Girls 800m- 3200m and 1600m champ Lucy Biles of Herriman got out to an early lead through the first 400m. It looked like Tory Parkinson of Mountain Crest might be closing in on her, but Lucy put in a secondary surge and pulled away for a dominant win with a time of 2:13.98. This caps off a great triple crown for Lucy, winning all three distance events. It also added valuable points in the team competition as Herriman looked to be in great position to win. Sierra Malm of Salem Hills has a great finish to grab second with a time of 2:16.75.  Tori Parkinson of Mountain Crest was third with a time of 2:17.20.

Boys 800m- Issac Faux of Maple Mountain took the race out hard and held the lead ‘til 200m to go. As they rounded the turn Sam Sorensen of Mountain View moved into to the lead with Jake Heslington right behind. Heslington surged hard trying to complete the triple, but Sorenson held on for the win with a time of 1:53.67 over Heslington at 1:53.70. Austin Brower of West Lake had a great finish to grab 3rd place in 1:56.05.

Girls Medley Relay- In a very exciting relay, Maple Mountain led nearly the entire way, with Orem, Box Elder, and Herriman still in the mix. As the 800m runners entered the final lap it looked like anyone’s race, though Lucy Biles of Herriman looked a little tired after her 800m, 1600m , and 3200m wins. Apparently she found a little more left in the tank as they entered the final stretch. She pulled out the win over Maple Mountain and won her 4th State Title on the weekend. Herriman’s time was 4:11. 83 to Maple Mountain’s 4:12.30. Box Elder was 3rd in 4:12.94.

Boys Medley- Skyline and Mountain View battled it out the entire race for an exciting finish.  Mountain View had to go very wide, all the way to lane 3, just to get around the Skyline Anchor. In the end Mountain View took the win in 3:33.15 to 3:33.43 for Skyline. Box Elder was 3rd with a time of 3:37.35.

Girls 200m- Kaysha Love and Lauren Baxter Battled all the way to the line in an exciting 200m Dash. Love, who set the state record in this event yesterday in the preliminary rounds, ran even faster today en route to the win, though the new record won’t stand because of the wind speed. Love ran 24.13 to Baxters 24.17. Brenna Porter of Sky View was 3rd in 24.71.

Girls 4x400m- The final event of the competition was the 4x400 relay. Going into the final exchange it was Timpanogos then Springville, with Timpview in 3rd. All three teams had a great race, but one team had was the 400m State Record holder, Lauren Baxter. Even though she got the baton back about 2 seconds, she finished very strong as Timpview pulled off a great win with a time of   3:59.51 to Springville in 4:01.41.

Boys 4x400m- Only one point separated Herriman and Woods Cross as they entered the final event. Unfortunately for Herriman they did not have a team in the race as Woods Cross only had to beat one team to tie for the title and finishing 7th would secure the title. In the end it wasn’t close as Woods Cross won the event in 3:21.69.  Timpview was 2nd 3:24.63 and West Lake grabbed 3rd in 3:24.78.