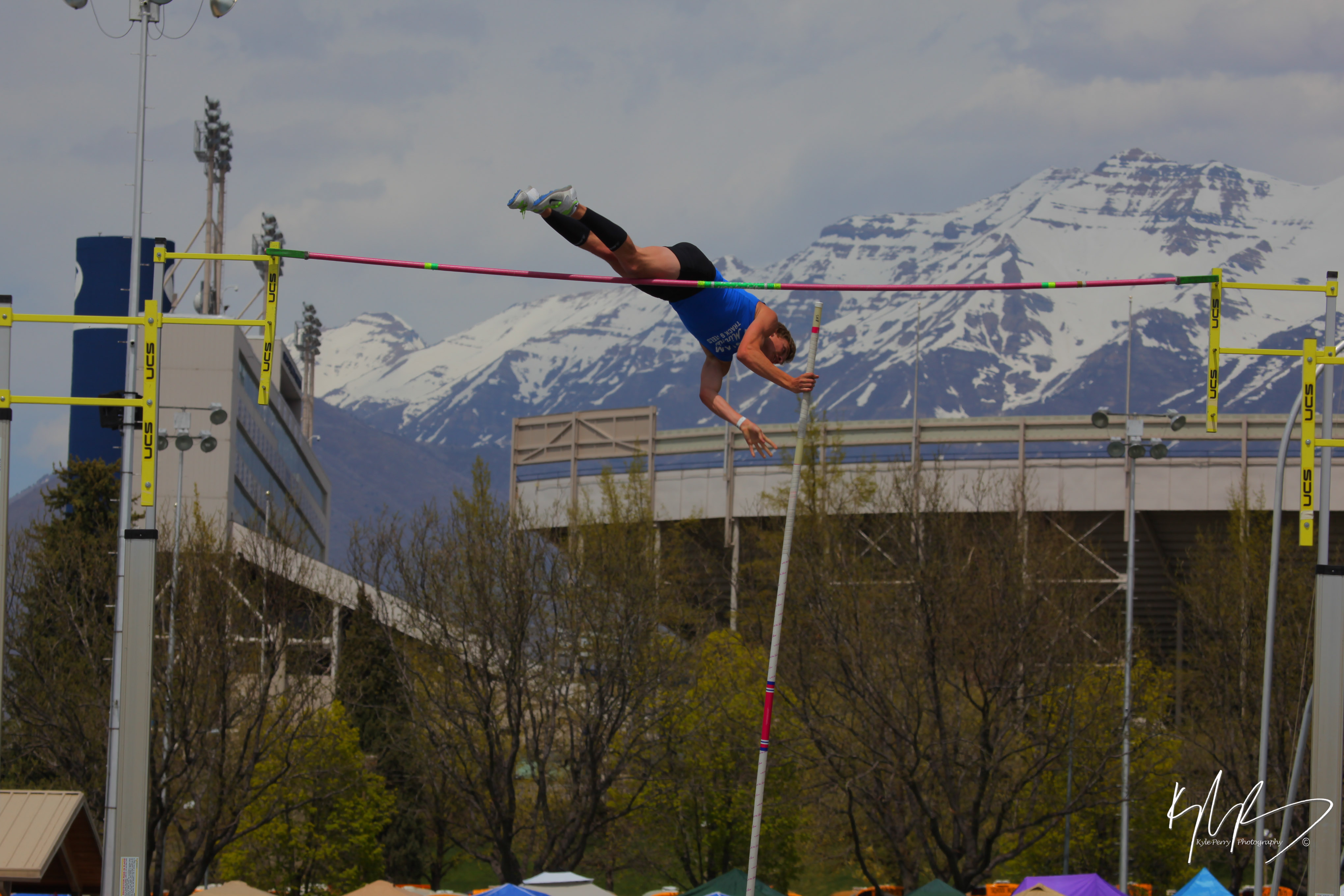 The BYU Invitational is quite literally the biggest meet of the year. It has more competition than any other meet, and the depth of the competition makes it ideal for elite performance. In Track and Field it is know that it is easier to perform at your best when you have great competition pushing you to your limits. That’s exactly what the BYU Invitational offers, with great depth in every division.

Pole Vault- Mitch Kalinin is the top vaulter in the state by nearly a foot this season. He electrified the crowd at the meet this weekend as he pushed the bar higher than he ever has before.  He cleared 14 feet 10 inches, and then went for more. As he went for 15’1” he couldn’t quite get his timing right as he failed to reach the 15 foot club but he showed he has the skill to do so.

Sean Halterman of Parowan cleared 13 feet  which is just two inches off his season best mark. He won the boys 1a-2a Pole Vault by 18 inches.

High Jump- Marcus Kemp of Layton High School won the boys High Jump clearing 6’7”, which is just one inch off his season and personal best. It was a very deep competition as he was followed closely by a 5 way tie for 2nd place at 6’5”.

Brenan Thomas of Richfield cleared 6’5” to be the top Utah athlete in the 1a-2a competition, and only one athlete in the meet, Kemp of Layton, cleared a higher bar than Thomas.

Long Jump- It doesn’t get much closer than it did in the Boys Long Jump, as Blake Williams of Viewmont won by a mere half inch over Austin Measles of Lehi.  Williams reached a mark of 21’8.25” to Measles 21’7.75.  It was a season best jump for Measles.

Brenan Thomas of Richfield won both of the Jumping events, winning the High Jump at 6’5” and then winning the Long Jump with a leap of 21’4” which is .75” off his season best.

Discus- Christian Shaver of Jordan improved on his state leading mark, throwing another 2 feet farther than he did last week at Davis. His throw of 168-02 beat out Miller Crawford of Riverton who threw 161’7.25”

Daven Russel of Kanab had a great meet where he won the Shot and the Discus, both in personal best fashion. He won the 1a-2a discus with a throw of 153 feet.

Javelin- Austin Kafentzis is the State Record holder in the event, and wins almost every time he throws. The Juab duo of Clark and Rowley would like to be the ones to steal a part of his glory. Clark didn’t start on the day, and Rowley just couldn’t match Kafentzis’ skill as Austin won by 12 feet. His winning mark was 188’2.25”.

Braxton Syrett of Bryce Valley had a very impressive throw of  173’3” which is a personal best for him.

Shot Put- It seems like its been the same names leading the state all year in the Boys shot put. This weekend was no different as it was a three way battle between Lavontae Calhoun of Jordan, Miller Crawford of Riverton, and Ben Bracken of Davis. Calhoun won on the day with a throw of 55’11.25” which was nearly 2 feet better than the nearest throw. Crawford was second and Bracken was 3rd at 54’ 0.5” and 52’ 3.25” respectively.

Daven Russell of Kanab had a great throw of 50’3.25” to win the 1A-2A Shot Put. His mark is a sign that he is moving in the right direction towards records and a state title in the event. His nearest competitor was 4 feet back.