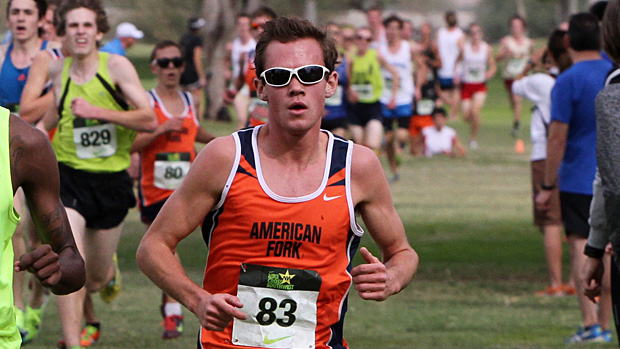 Brayden McLelland led American Fork's charge on Saturday with a 15:03 in sixth. Photo by Alan Versaw.

Any way you look at it, it was a stellar weekend for the Utah schools at Nike Cross Regionals - Southwest. Whether it was the boys extending their reign of dominance over the region or the girls enjoying their best Nike Regional meet in six tries, everything seemed to come up big for the Utah schools.

In the boys championship race, nobody had any answers to the American Fork machine. Brayden McLelland climbing about five places in the last 500 meters merely typified the kind of dominance his team exerted in this day. American Fork's team score of 36 was 127 points better than second. And second was long-time in-state rival Davis.
Utah also nailed down fourth in the name of Herriman, and added a seventh by Mountain View, a ninth by Bonneville, and a tenth by Ogden. That didn't leave a whole lot for the other states to quibble over.
Individual places were only slightly less tilted in Utah's favor. Among the top ten individuals, Utah claimed Ben Saarel in second, Jordan Cross in fourth, Jake Heslington in fifth, Brayden McLelland in sixth, Connor McMillan in ninth and Michael Finch in tenth. It's difficult to be much more dominant than that. That left two top-ten slots for Arizona, one for New Mexico, and one for Colorado. Game over.
While Utah didn't enjoy the same measure of dominance in the girls race, they did threaten Colorado's domination in a way it has never been threatened before in the meet's six-year history.
It started with Davis rebounding from a somewhat disappointing state meet effort to take the NXR-SW title away from the heavily favored Xavier College Prep and Fort Collins teams. 3A powers Park City and Ogden staked their claims at fifth and sixth. American Fork and Mountain Crest closed out the top 10. In the lore of Park City cross country, this will be a year long remembered.
Davis's winning effort was paced by two top-ten finishes from (who else?) Shea Martinez and Ellie Child. Utah also got two more in the top ten in the persons of Lucy Biles (4th, 17:23) and Summer Harper (5th, 17:31).
And thus did Utah more or less match Colorado at the top of the girls ordering, while dominating all three other states from the Southwest region.
While Utah's best performances occurred in the championship races, there were highlights emanating from the open races as well.
Orem's boys came home with a very solid second in the open boys team competition, led by Matt Owens with a matching second as an individual. Davis's B and C teams claimed fourth and seventh in the open race B competition, underscoring a conclusion most had already come to--Davis will be a force to contend with for the forseeable future.
Among the open girls, Davis's B team claimed a very respectable fifth, but none of Utah's girls entered in the race claimed a top-ten finish.
Boys Championship Race Video
Girls Championship Race Video
Meet Results and Photos
Tweets by MilesplitUtah