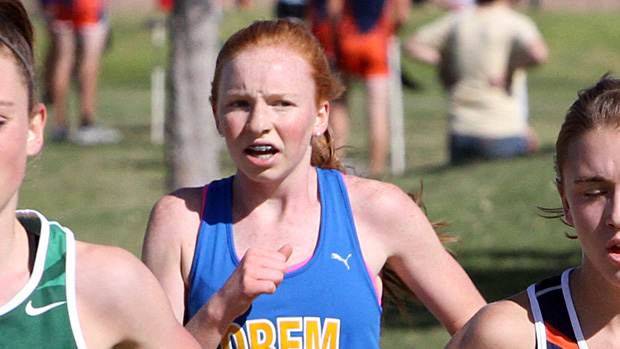 If we had done this list last year, a lot of the names from last year would have graduated off of the list. Funny, though, but there doesn't seem to be a dearth of name possibilities for this year. In fact, there were so many solid possibilities that a lot of folks are going to look at this list and think, "But, you forgot about...." Possibly so, but probably not. From about #6 on, the decisions were all of the hair-splitting variety.

Taking all the factors we can find into account, here's the preseason top 10 list for this fall:

1. Summer Harper, Orem - This pick wasn't difficult, since Harper tops the list of returners in cross country and in the 3200 as well. There simply isn't much to argue with here. Harper looks like the girl with the target on her back.

2. Sarah Feeny, Ogden - If you're looking for a close second, that would be Feeny. Feeny ran four seconds behind Harper at NXR-SW, and ran ten seconds slower than Harper (though in a different race) at the state meet in the 3200. But, like Harper, Feeny is set up for a monster season.

3. Miranda O'Very, Mountain Crest - At this point, the selections starting becoming both difficult and subjective. Any way you look at it, though, running a 10:56 3200 as a freshman at the state meet shows a lot of moxey. For now, I'm working on the interpretation that O'Very spent her cross country season last year learning what she could do and her track season showing it. Keep very close tabs on this one.

4. Shea Martinez, Davis - Martinez has had her ups and downs in both cross country and track and field, but when her race is on, she can be absolutely devastating. We'll wait and see how things go for her this fall.

5. Emily Rich, Bingham - Rich has proven herself in both track and cross country. She's not going to be left behind in many races. She is a top-ten returner in cross country and one of four returning girls who saw the south side of 11:00 in the 3200 on the track this spring.

6. Alisse Walker, Park City - Walker did not have a very satisfying end to her cross country season last fall. Most of the Park City team shared in that fate, for that matter. But Walker took it out on the track this spring, clocking a season-best time of 11:03 in the 3200. You have to believe she's setting up for a better cross country season this year than how the one last year finished.

7. Amanda Turnbull, Mountain View - Turnbull was solid in cross country last fall, but showed some definite improvement on the track this spring. Distance coaches like positive trends and Turnbull seems to be on one at the moment. An 11:06 3200 speaks well of the possibilities for this fall.

8. Candace Greenwood, Orem - Greenwood was consistent this spring in track, and seems to be improved somewhat over the performances she had in cross country last fall. On the basis of the positive trending, she, too, has earned a slot in the top ten.

9. Whitney Paskins, Alta  - By now, you should be noticing the recurring theme on the lower half of this list. It wouldn't be terribly difficult to miss noticing how Paskins did in cross country last fall. She was solid, but just a little short of spectacular. Track this spring, however, was a different story. Paskins' 11:06 3200 at the state meet speaks for itself.

10. Tavia Dutson, Jordan - Dutson was very consistent in both track and field and cross country last school year. Longer distance seems to be more her game than shorter, and that should help where cross country is concerned.