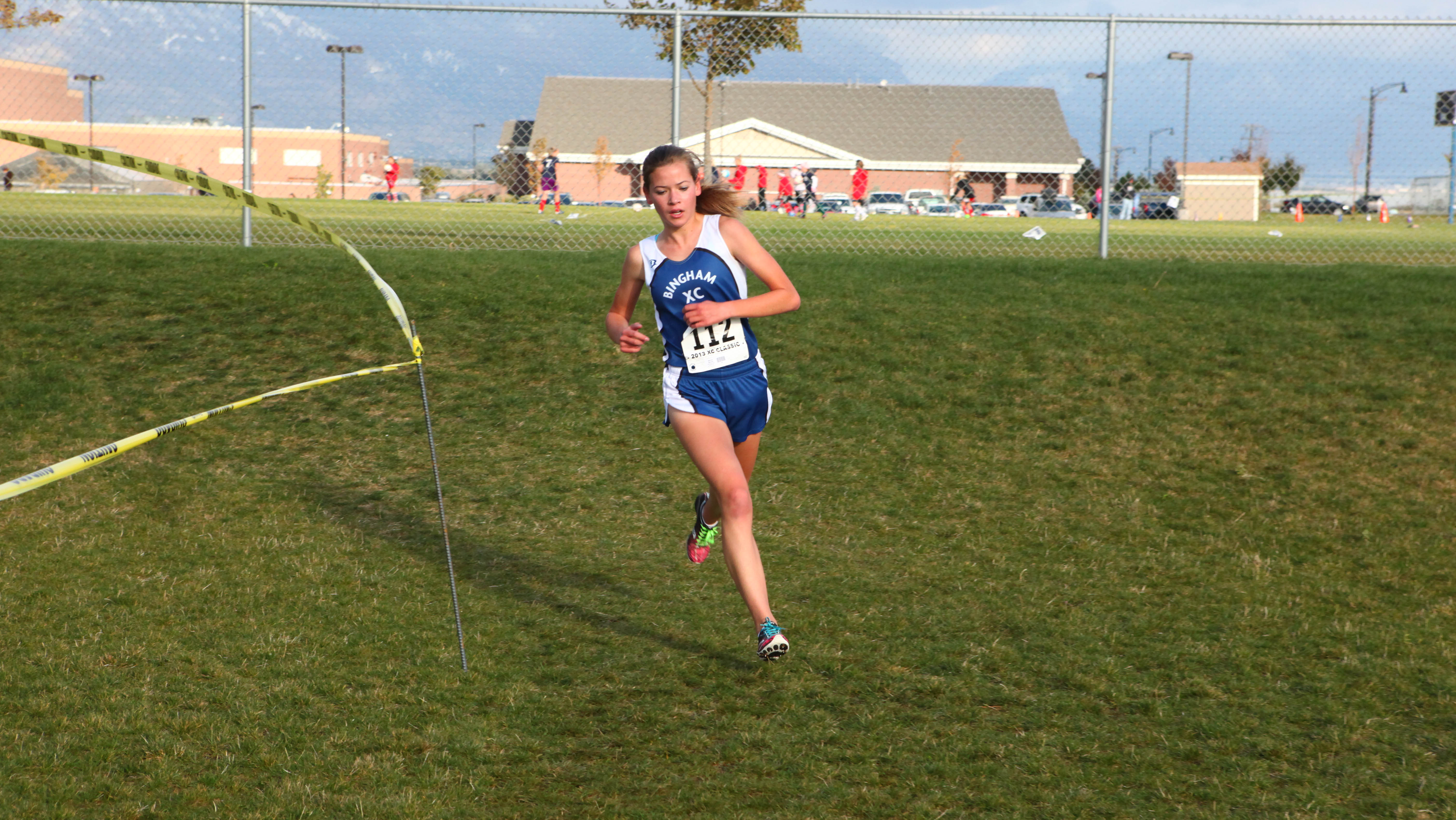 Westlake High School hosted their annual Cross-Country Classic on Friday night in Saratoga Springs. With snow falling in the morning, the sun came out and warmed things up enough to make conditions nearly perfect. Temperatures were cold, and the large crowd of fans that came to the meet to cheer on their teams had to bundle in their winter coats.  Though it was cold, it was a perfect temperature for a race.  It was just cold enough to allow the athletes to race without over heating, while not being so cold that they had to add layers to their XC uniforms.

Individual Girls- The Girls took the course before the boys, and it was a shootout. Early in the race there was a good pack of girls all trying to hold on to the 1-2 charge of Marlee Mitchell and Whitney Rich of Bingham.  Through the first mile there was a pretty good size group with the leaders, but then Mitchell decided to make a move and see who could match her. She pulled away steadily while behind her Aubrey Argyle, Whitney Rich, Taylor Cox, Candace Greenwood, and Anna Gibson all struggled to close the gap. In the end it was a run away victory for Mitchell, winning with a season best time of 17:07. Aubrey Argyle finished very strong to hold off Anna Gibson. Whitney Rich and Taylor Cox rounded out the top 5. Girls Photo Album

Girls Team Race- The Davis High girls entered the meet ranked #1 in the nation. They lived up to the billing as they ran a very strong team race. The Darts have it all, girls that can compete for the win, a small spread, and depth that is unmatched. In Fridays race, Bingham hoped to do big things against the Darts, and with their leading duo of  Mitchell and Rich they looked like they could compete. Behind the front few runners was a wall of Davis girls in their Gold jerseys, and that is what really killed the chances of any other team. Davis placed 8 girls in the top 16 of the race. American Fork didn’t have a threat for the win on the day, but what they did have was depth of their own, good enough to beat out Bingham for second. Girls Photo Album 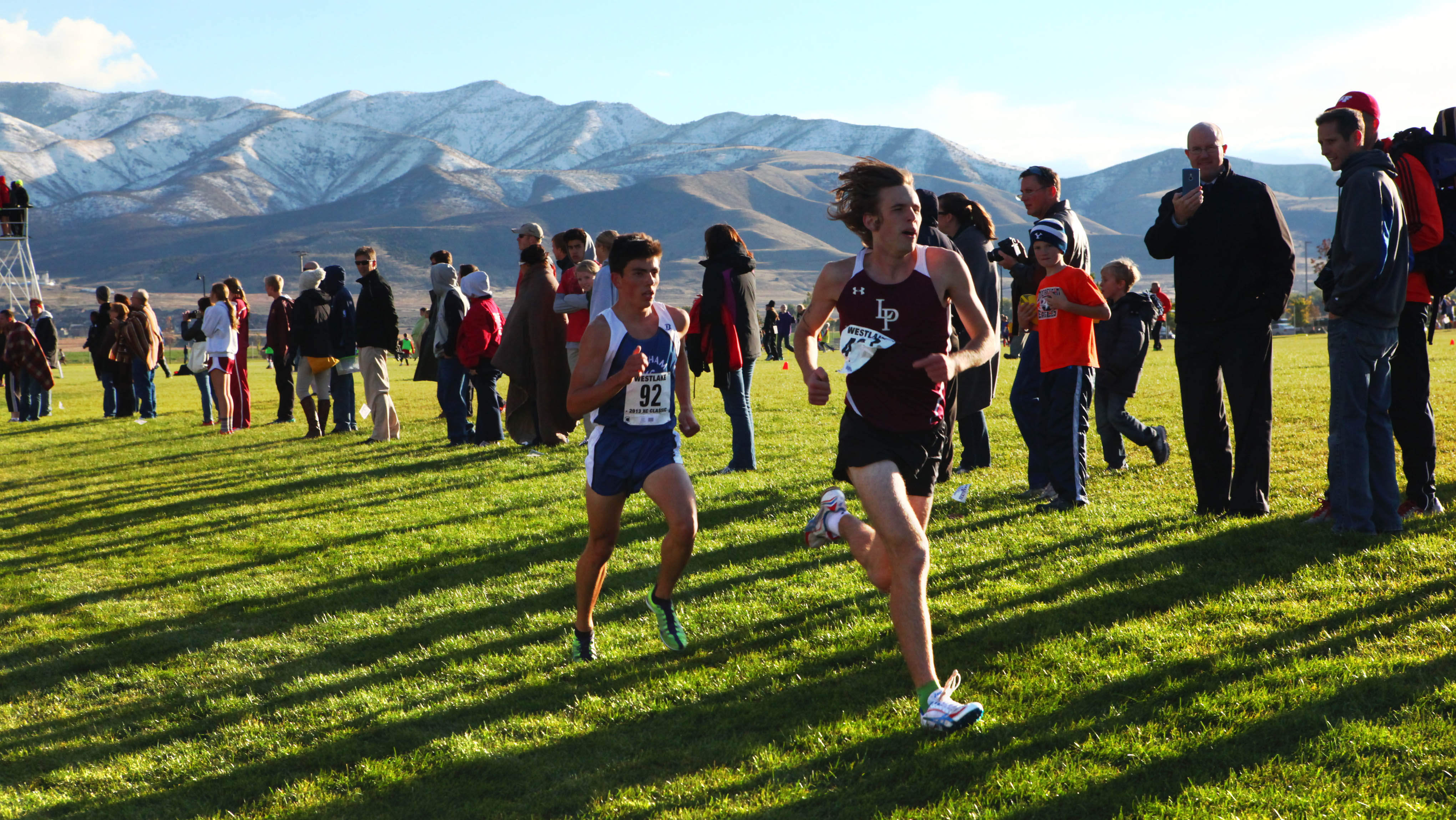 Boys Individual- The Boys race was very different from the girls race. Clayson Shumway has had the most success on the season, and was the favorite in the race, but there was a very big pack of talented runners that looked to challenge. After the gun went off and the early race nerves settled, 11 runners joined into a tight pack off the front of the race. Led by Josh Collins of Wasatch through the first mile, Shumway, Brewer, and Walker were mixed among the lead pack. As they neared mile 2, Andrew Brewer of Bingham took the lead, but that didn’t last long. Clayson Shumway saw an opportunity to make a move and took it. He pushed the pace hard for the next mile, with Brewer in tow. Shumway began to gap brewer and looked to be running away with the race, but brewer had different plans. He closed the gap and as they appeared on the home stretch they were side by side. They both sprinted as hard as they can and in the end it was the Bingham star picking up a signature win for the season. Shumway was a close second with Caleb Walker, also of Bingham, coming up for third. Garrett Marsing of Carbon has run consistently all season, and will be one of the favorites in the 3A in a few weeks. He was 4th just behind Walker. Boys Photo Album

Boys Team Race- The Boys team race was very close battle. American Fork boys enter the race ranked #3 nationally, but elected not to run their top few guys. This opened the door wide for a battle between also Nationally Ranked Bingham and Lone Peak, Davis, and Westlake. Bingham had a huge lead through 4 runners, on the back of their 1st and 3rd overall finishers. But as they waited for their 5th runner to cross the line. Davis and Lone Peak put 5 guys in. Davis had 5 across the line first, with Davis, American Fork, and Westlake all putting in their 5th man at nearly the exact same time. Only 13 points separated 1st through 5th in this tight team battle. Though Bingham’s 5th runner was back a little more, they were still able to hold on for the win, with Lone Peak grabbing second and Davis Third. Boys Photo Album

Elite performances from this session