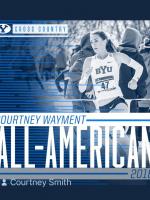 Play
Courtney Wayment wants to shred her times down

Utah Girls Fastest 500 XC Runners Of The Decade...
Find out who were the fastest 500 girls cross country runners of the decade in the state of Utah from the 2010 to 2019 seasons....

Familiar Teams, Faces Dominate Nike Southwest Girls...
At two miles, Katie Rainsberger's pace was taking its toll on Courtney Wayment and Lauren Gregory. The rest of the field had lost contact by that point. Photo by Alan Versaw....

Utah State Champs: In Depth All Class Recap...
MileSplit has you covered with in depth recaps for every race from the 2015 State Champs!...