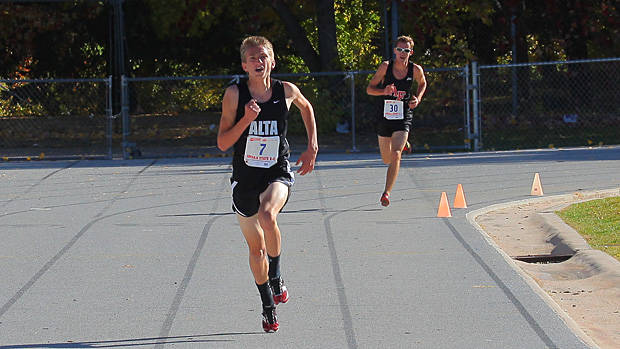 Kramer Morton clinches the state title on the track portion of the course back in October. He will carry equally ambitious goals into this weekend. Photo by Kyle Perry.

And it's not that Utah shuns their NXN regional meet. On a per capita basis, Utah and Colorado ran neck-and-neck at NXR-SW, both far ahead of the other three states in the region.

Knowing that, it's not terribly surprising that a state of about only 2.8 million people will be represented by five individuals at Foot Locker Nationals. Those five would be Ben Saarel, the 3A state champion and an NXN qualifier before he turned that opportunity down to participate in the Foot Locker West regional, Kramer Morton, the Utah 5A state champion, by Conner Mantz, the third-place finisher in 4A and only a sophomore, by Summer Harper, the 4A third-place finisher, and Sarah Feeny, the 3A runner-up.

Utah doesn't always end up with a crop like this at Foot Locker Nationals, but given the kind of season Utah's harriers enjoyed this fall, it's hardly surprising that five made it this year.

The five will wear the colors of the West region team on Saturday, but--at this point in the game--it's probably a safe bet to say that blood runs thicker than water. The support base is firmly fixed in Utah and the athletes will go to Utah knowing that it is at least as much for all of Utah as for the West region that they run.

Saturday's race will take place in San Diego's Balboa Park. Despite a couple of substanial hill climbs, the course tends to run a little on the side of fast. Altitude training tends to pay of well on hills at low elevation, but a number of other variables can impact race performance. The remainder of this week's forecast suggests this won't be one of the years that rain falls on the race, so that kind of variable should be out of play. Figure on the course being firm and dry.

The consensus pick as Utah's best hope for a podium kind of finish is clearly Ben Saarel. A first at state, a second at NXR-SW, and a first at FLW suggest that Saarel is very much on top of his game as the season comes to a close. One more race to run for the accomplished Park City senior. He won't come into the race as the favorite, but he is definitely on the short list of contenders to watch for.

The girls race begins at 10:15 AM MST on Saturday, and the boys at 11 AM. The entirety of each race can be viewed via webcast.

Note: MileSplit National is scheduling video interviews with all contestants following Saturday's race. All Utah athlete videos will be linked to the Utah MileSplit page.