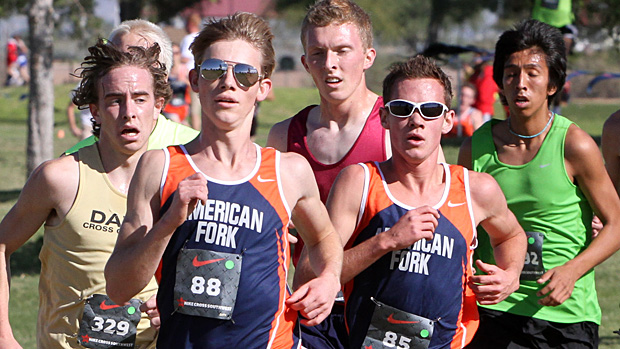 Clayton Young has graduated, and so the mantle of leadership at American Fork passes to Brayden McLelland. Photo by Alan Versaw.

Ever since Alta had their amazing year in 2008, it's been American Fork and Davis, in that order, at the top of Utah 5A boys cross country. Maybe something changes this year. But maybe not very much.

Realistically, as you look at track results from this spring, you would have to conclude that Davis goes into the fall cross country season as the favorite over the defending state champions from American Fork.  Davis also holds the motivating factor of being perhaps a little chafed over the string of state meet losses to American Fork. But, both teams still figure to be head-and-shoulders above the rest of the field.

That's not to say, however, that the rest of the field hasn't gotten better. They have. It's just an enormous gap to close, even when both American Fork and Davis lose several top runners to graduation.

As is our custom, we'll look first at the returners from the top 50 of last fall's state meet:

And, this does yield a somewhat different picture. While nobody else has climbed to the top rung of the ladder to join Davis and American Fork, this analysis is clearly advantage Davis. Three of the top four, and five of the top 13, belong to Davis. Davis's top three, Brayden Cromar, Alex Hedquist, and Andrew Aposhian, each bring back sub-9:30 credentials. The depth of quality in this program defies comprehension. But, American Fork isn't far back.

Both teams bring back five guys under 10:00. This would be less impressive if the times were run at sea level. It's probably safe to say neither team is printing state championship t-shirts yet. Neither is any team conceding anything to the other.

Bingham looks to have the strongest roster, but it would be premature to dismiss any of Lone Peak, Alta, or Riverton. Riverton's credentials, however, look a little better from cross country than from distance performances this spring.

A quick glance at the rankings of returning 1600 runners from this spring reveals little in the way of additional information except that Davis's advantage over American Fork increases at shorter distances. That may not be especially relevant at cross country distances, however.

If there is a team able to rise to the level of American Fork and Davis, that will be the big news of Utah cross country 2012.