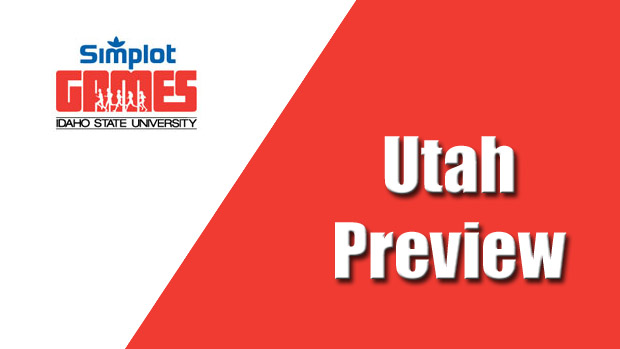 It's almost time for the Simplot Games to begin and the Utah contingent appears ready to breathe some fire into Holt Arena.

In the entire Rocky Mountain region there is no high school indoor event to rival the Simplot Games. This event, not some event on the eastern seaboard, is the climax of the indoor season for Colorado, Wyoming, Montana, Idaho, Utah, and even beyond.

Utah's reputation for bringing top talent, and loads of it, to this meet barely needs mentioning. Proximity helps, and the fact that Pocatello is about a three-hour drive from the Salt Lake City area means the event is highly accessible to a large segment of Utah's population.

But the event isn't just accessible, for one weekend in February, Pocatello exerts a gravitational pull on the high school athletes living along the Wasatch Front. This year is no exception.

A string of well-attended high school indoor meets have been held in Utah this January into early February. It's no longer very difficult to identify the top talent heading north for the meet and how their seasons have been developing to this point.

Utah figures to be very well represented in the distance events. That would include both boys and girls. Those prelimary rounds will run all through Thursday evening. Some of the marquee matchups include:

1. Kelsey Braithwaite, Natalie Shields, and Summer Harper will square off in the same preliminary round of the 3200. Sarah Feeny dodged that bullet and will be running in the next heat. However it all shakes out, expect Utah to be well represented in Saturday's final.

2. The 1600 gets some big-time name recognition from Jamie Stokes and Ashleigh Warner, both of whom have already posted very nice 1600 times this winter.

3. Working down to the 800, there will be a lot of eyes on Shea Martinez as she steps onto the track in her signature event, but Ellie Child figures to be heard from as well. It will be very interesting to see how Martinez's 2:13 on the oversized Mondo oval translates into a time on the 200-meter banked wooden oval in Pocatello.

4. Moving down to the 400, it's curious to note that none of the three girls from Utah who have posted sub-60 times so far this indoor season are entered. So, we move on to the sprints (60 and 200), where we find only one Utah sprinter--Sylvia Harrison--occupying a top seed in one of the 60 meter heats. It's worth noting, however, that the 60 meter field boasts some devastating talent. It's a similar situation in the 200 meter event, and only Lauren Baxter from Utah holds down a top seed in any heat.

5. Adelyn Jones represents Utah's best hope in the 60 hurdles, but it's worth noting once again that the hurdle event is stacked very deep in extraordinary talent this year.

6. Jeni Christensen should be Utah's top pole vault entry. Utah, however, is not a traditional pole vault power and Christensen will find stiff competition waiting for her in Pocatello. This would be a great opportunity to rise to the occasion, however.

7. Of Utah's five girls who have cleared 5-4 or better in the high jump this winter, only Taylir Garrison and Audrey Muir appear on the list of entries.

8. In the shot put, however, Utah's top two throwers of the winter season, Heilala Havea and Salina Sosima, are both entered. These two will get the honor of competing against the crew than annually comes up from Georgia, representing the Throw1Deep club. You can guess that club isn't about distance running.

Utah also has several athletes to keep an eye on on the boys' side as well. Distance running has been highly competitive throughout the indoor season this winter and now the Utah guys travel to take on the challengers from across the region.

1. Utah already has 20 boys under 10:00 for the 3200 this indoor season. Ben Saarel and Logan Wood go in the first preliminary heat of the 3200. Brayden Cromar, Jordan Cross, Preston Johnson, and Andrew Aposhian get the second heat. You can figure the final is likely to be heavy in Utah entries.

2. Brad Nye takes his 4:13 (at altitude) seed time into the 1600 and figures to be the guy to beat. Haven Shelton has already run close to Nye this winter and figures to be one of the first guys to try to give Nye a run for his money. Jake Heslington rounds out the short list of promising Utah entries in this event.

3. Jackson Sagers appears to be the top Utah entry in the 800 as Nye and Shelton opted for the 1600. That said, there is a mass of Utah entries in the 800 and someone or two may find themselves busting through with a big performance.

4. Cole Lambourne and Cole Odle own the top two indoor 400 times in the state and both with go into the prelims with the tops seeds in their respective heats. It may not be like running on the spacious turns of the Olympic Ice Oval, but both should be very competitive.

6. Zach Watson and Jake Zaugg take their 13-6 season best pole vault marks into Pocatello with hopes of taking their heights up a notch or two on the standards.

All through the weekend, we'll be tracking results for these athletes and many more from Utah. Keep checking in here for summaries of the action from Pocatello.