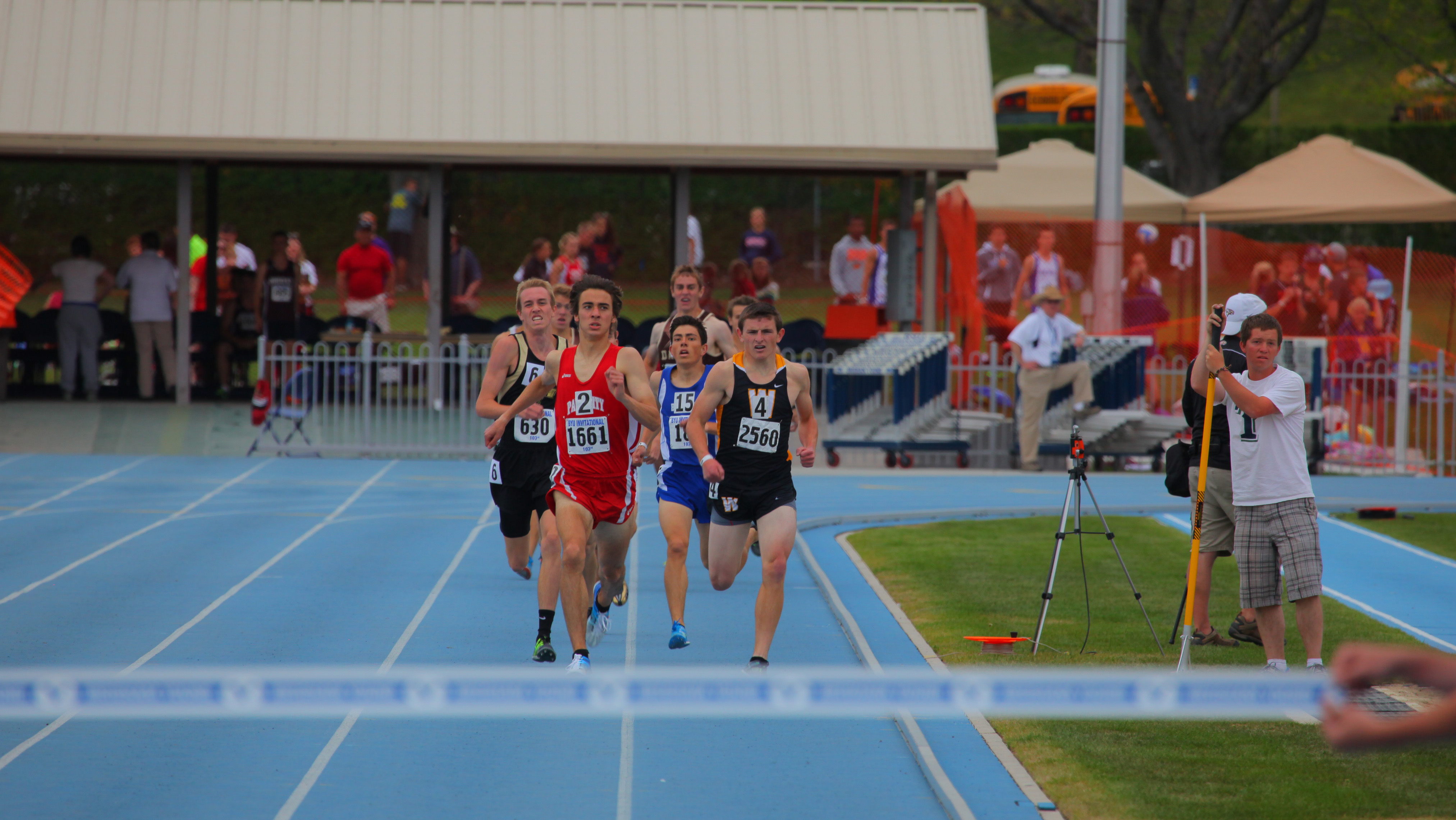 Ben Saarel and Talem Franco ran the two fastest times on the day at 4:07 and 4:10- Photo by Kyle Perry

Provo, Utah- Day one of the 2013 Utah State Track and Field Championships took place today at the Robison Track Complex in Provo.  The competitors got to deal with blustery conditions and scattered showers on the day as a storm moved through the valley. Most events had preliminary rounds today to qualify for tomorrows finals, but the two finals on the track today provided plenty of excitement for everyone in attendance. On the track first was the 1600m Run, where 10 state champions were crowned, 5 in the Boys and 5 in girls.

The most impressive of all the divisions was the 3a, where Sarah Feeny of Ogden and Ben Saarel of Park City both set big state records in the event. Saarel smashed the record held by Luke Puskedra with his winning time of 4:07.95, The fastest time ever run by a Highschooler on Utah Soil. Sarah Feeny bettered her own record of 4:53.06 bringing all the way down to 4:50.04.  Behind Saarel with an amazing performance and a 10 second PR was Talem Franco of Wasatch placing 2nd in 4:10. Franco would have been state champion in every division but his own, and will likely look to grab a title tomorrow as he is very well matched up against Saarel in the 800m. Behind Feeny in the girls race was Aimee Bryson of Cedar at 4:57. Bryson has a lot of foot speed and will look to pick up wins in the 200,400, and 800 tomorrow. 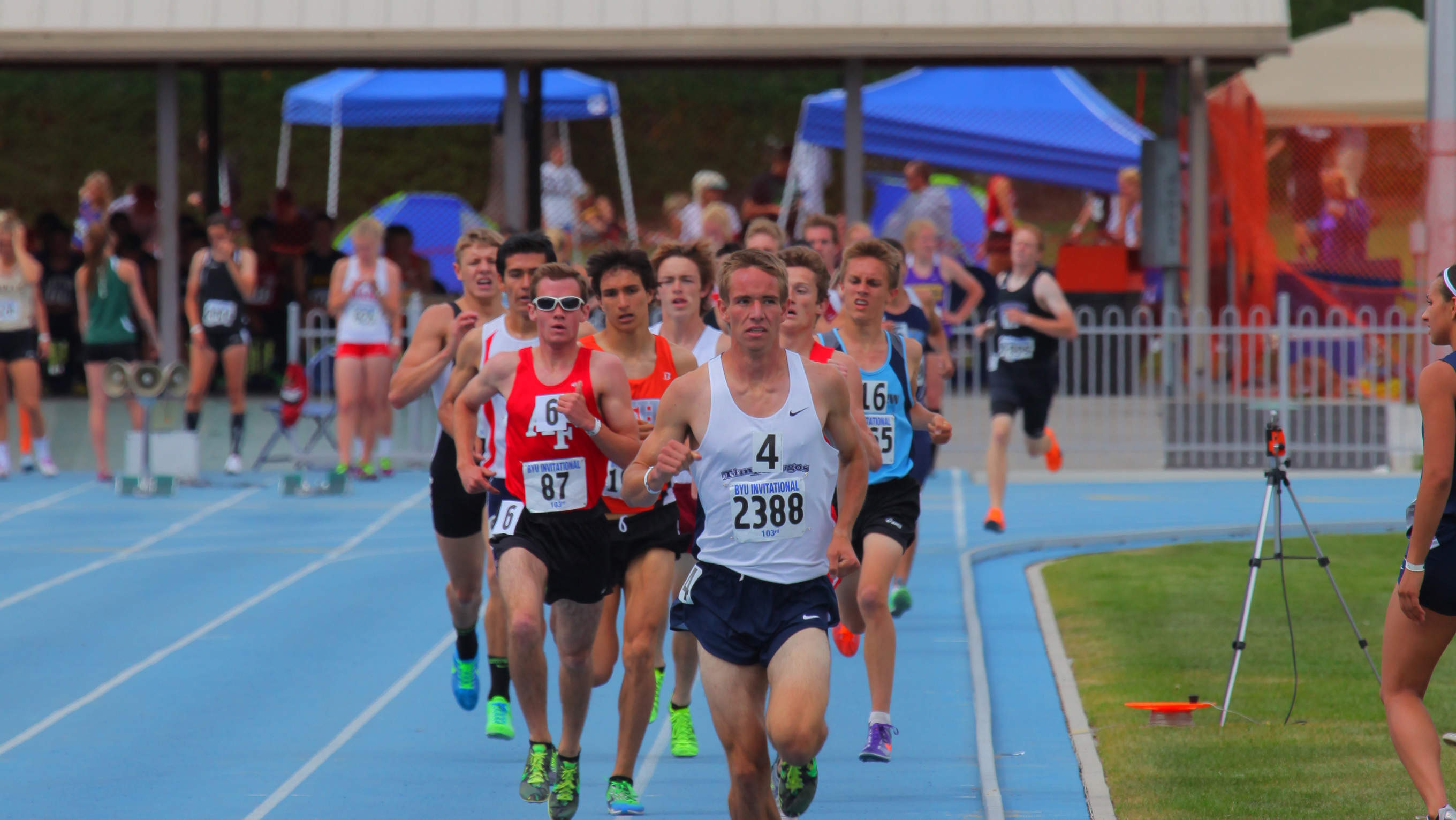 In the 4a race, BYU bound Jake Heslington won the race on what will be his home track next season. He won with a time of 4:12 over a solid group of underclassman led By Westlake JR Austin Brower with a PR of 4:15.05. Conner Mantz, a Sophomore from Skyview came in 3rd at 4:16.08. Mantz is one of the favorites tomorrow in the 3200m as Brower is as well in the 800m.

The 4a Girls race was won by Herriman star Lucy Biles. Only a sophomore, Biles is the defending XC state champion and added another State title to her collection, which still has years to grow. She beat out a very talented Summer Harper, who was 3 seconds back at 4:59. Harper will look to bounce back to victory tomorrow in the 3200m.

The 5a Boys race was dominated by Andrew Brewer of Bingham. Brewer used his great finishing speed to run a staggering personal best of 4:13.83, just off the state record of 4:13 even. Just behind Brewer was Brayden McLelland of American Fork, who also ran a big PR of 4:14.67 in what was one of the fastest 5a state championship 1-2 finish in history. 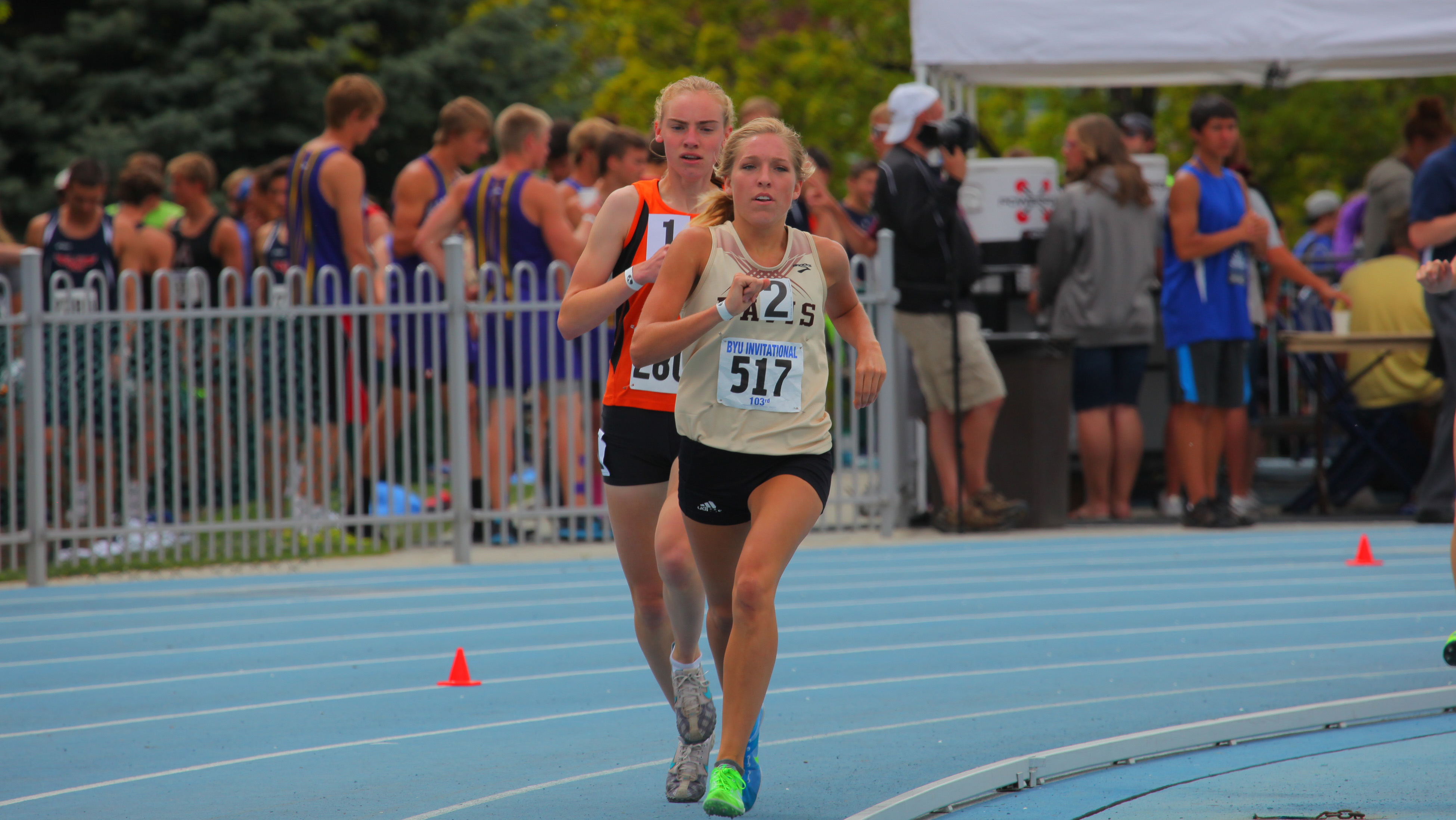 The 5a Girls Race was exciting, with Davis Duo Shea Martinez and Ellie Child fighting to hold off Bingham senior Emily Rich. Martinez won in 4:55, with Child in second at 4:58.96, and Rich exactly one second behind her at 4:59.96. This sets the stage for an exciting Day tomorrow where these girls will meet up again over 800m.

The 1a girls race, Panguitch picked up valuable team points as they went 1,2, and 4 behind a great performance by Whitney Orton. Orton ran 5:23.83 to beat her teammate Catania Holman who finished less than a second behind in 5:24. 57.

The 1a Boys Race was dominated by Vance Weston of Rich, who ran 4:32 to win by over 6 seconds. Ethan Young of Milford was second followed by Dylan Lindsay of Altamont.

The Sprint Medley Relay finals for 1A-3A also took place on day 1 of competition. In the 3A Girls competition Sarah Feeny of Ogden came back from her state record performance in the 1600m to achor her team to the title and add valuable points to her teams overall title hopes. in the process the Ogden Girls smashed the state record in the event. The previous record, held by Judge Memorial, was set at 4:07.91. The Tigers team of Lindsey Bray, Maddie White, Avery Calton, and Sarah Feeny, posted a time of 4:03.22 today breaking the record by 4.5 seconds. Park City came in second in an exciting finish just beating out Wasatch 4:11.37 to 4:11.63.

In the 3a Boys Relay, Talem Franco, who earlier in the day ran a Utah #3 all-time in the 1600m, came back to anchor the boys relay to a State Championship. They beat out a strong Desert Hills team in the process, as the Wasps finished in 3:35.19 to Desert Hills' 3:38.94. The winning team from Wasatch consisted of Mate Tate, Anderson Davis, Preston Willey, and Talem Franco.

Richfield Boys are favored to win the team title in the meet, and added 10 points to the cause as they won the 2a Boys Sprint Medley Relay. They Beat Emery High 3:45 to 3:48. North Summit came in 3rd in 3:53.

Richfield also grabbed the victory in the Girls Sprint Medley Relay as they beat out North Summit at the line in a very exciting finish. Richfield's final time was 4:21.63 to North Summit's 4:21.98. Haddie Holt, Makenna McEwen, Bonnie Curtis, and Lydia Foster made up the state championship team.

Wayne High won the Girls 1A Sprint Medley Relay over Panguitch with a winning time of 4:27.23. Wayne and Panguitch are very closely matched in the team competition and the 2 points Wayne grabbed over Panguitch could go a long way towards the end goal. The Wayne team consisted of Brinlee Chappell, Maggie Ellett, and Lauren Jackson.

Rich High School is set for a very close three way battle with Layton Christian and Panguitch. Rich Won the Sprint Medley Relay on the Day which will help their cause. Possibly just as important as the 10 points they grabbed in the event is the fact that Panguitch only scored 3 and Layton Christian didn't score are all. The State Champion Rich team consisted of Dyson Barker, Alec Silva, Jayden Wallentine, and Austin Groll.