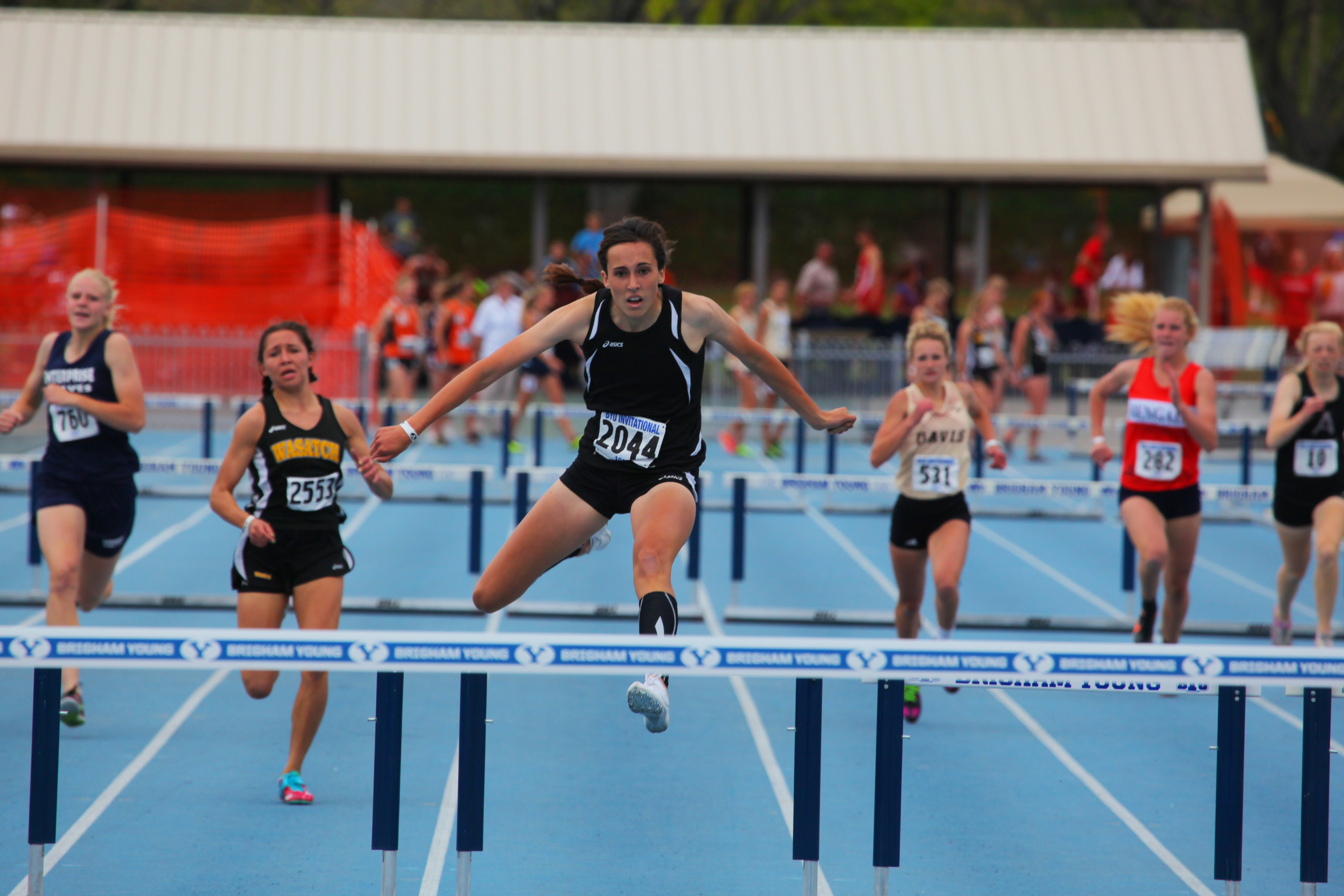 When the BYU Invitational’s Golden Hour began there was a slight wind, overcast but bright skies, and comfortable temperatures to set the stage for some very good times.

Girls 300 Hurdles- Nationally ranked state record holder Brenna Porter had the “sweet” seed in the Girls 300H running out of lane 5. She did not disappoint. Achieving her goal of breaking 42, Porter reset her own state as she finished in a blazing time of 41.54. “I’m so excited cause that’s what I have been trying to accomplish,” said an elated Porter after her win, “its good to see all the hard work has paid off.” Not only was this a new state record but the 4th fastest time in the country this year. Kaitlin Walker finished second, also running an outstanding time of 42.97. Coming back from a strong finish in the 100 hurdles, Tawni Moore led most of the race, but was passed in the home stretch by Carly Dalton who won in 45.67in the second heat of the 300 Hurdles. Riley Lyman of Enterprise also set a 2a State record with her time of 44.10

Girls 1600 Meter Run- Ellie Child of Davis had the best start in the race and got out to an early lead as the pack came across 400 at 1:09. As they rounded the third turn Ellie and Sarah Feeny began to pull away from the rest of the field. At about 700 meters Feeny took the lead. She kept a steady pressure on the pace crossing the halfway point in 2:24 as she began to pull away from Child. The third lap was a Sarah Feeny show, as she pulled away decisively crossing 1200m in 3:41. The pack started to string out trying to catch Child, though it was clear that no one was catching Feeny. Aimee Bryson from Cedar had pulled into 2nd by the start of the gun lap. With 200m to go Feeny kicked hard, her legs hardly looked tired from yesterday’s 2 mile State Record. She broke the tape in 4:51 which is a new 3a State Record. Bryson held on for 2nd, followed by Emily Rich of Bingham in 3rd.

Girls 100 hurdles- Brenna Porter from Skview won the meet, though she faced fierce competition in the lane next to her from Tawni Moore. Porter recorded a time of 14.37.

Girls 100 Meter Dash- In the fast heat of the finals it was a very tight race among several competitors, and Kayla Shakespeare of Cedar came out on top with a time of 12.54. The second heat was a tight race. Ashlynn Alred prevailed over Lana Willard by .02 in 12.65 out of lane 5.

Girls 400m Dash- By the time the 400m rolled around the temperatures had cooled down to almost idea conditions. The flag stood limp. In the first section of the Girls 400m finals Bonnie Curtis won in 58.88. In the finals section, Lauren Baxter was down right dominant in winning the 400m finals in a blazing time of 54.99, which is a personal best for her and also a state leading mark this season.

Girls 800m Dash- Breaking normal Utah afternoon weather patterns, conditions remained ideal for the 800m run.  State record holder and BYU bound Shea Martinez Davis went out hard as usual,  crossing 400m in 63 seconds. It was clear the race was for 2nd as Martinez crossed 600m in 1:36, and finishing in 2:08.45 breaking her own state record by three tenths of second. Avery Calton and Sarah Feeny of Ogden were 2nd and 3rd in 2:12 and 2:14 respectively.

Girls Sprint Medley Box Elder and Cedar battled hard on every leg of the Girls sprint medley, but Cedar came out the victor in 4:12.12. In a very impressive solo effort, Salem Hills won their heat earlier in the day in a time just short of Cedar’s overall winning time. The two teams are now ranked 1st and 2nd in the state this year. It will be fun to see these two teams head to head.

Girls 200m Dash- As spectators began to feel sporatic raindrops, the Finals of the Girls 200m lined up. This was also a close race as Samantha Reeves used a great last 10 meters as she won in 25.19 over Sydney Bricker of Hillcrest who finished in 25.19

Girls 4x400- While no serious rain started, the stands began to empty, the temperatures dropped and the wind picked up by the time the 4x400m rolled around. Davis raced to the early lead being the first to complete the first exchange.  Though Maple Mountain was the first after the break and to the second exchange. They were being chased closely by the teams from Mountain Crest and Wasatch at the exchange. Davis was not out of it, climbing back into second at the third exchange, but still trailing Maple Mountain. Having state record holder Shea Martinez as an anchor certainly helped Davis as they were able to win by about 5 meters in 3:58.46. Maple Mountain was all smiles after the race and their coach was whooping and hollering; they were certainly pleased with their strong second place performance.