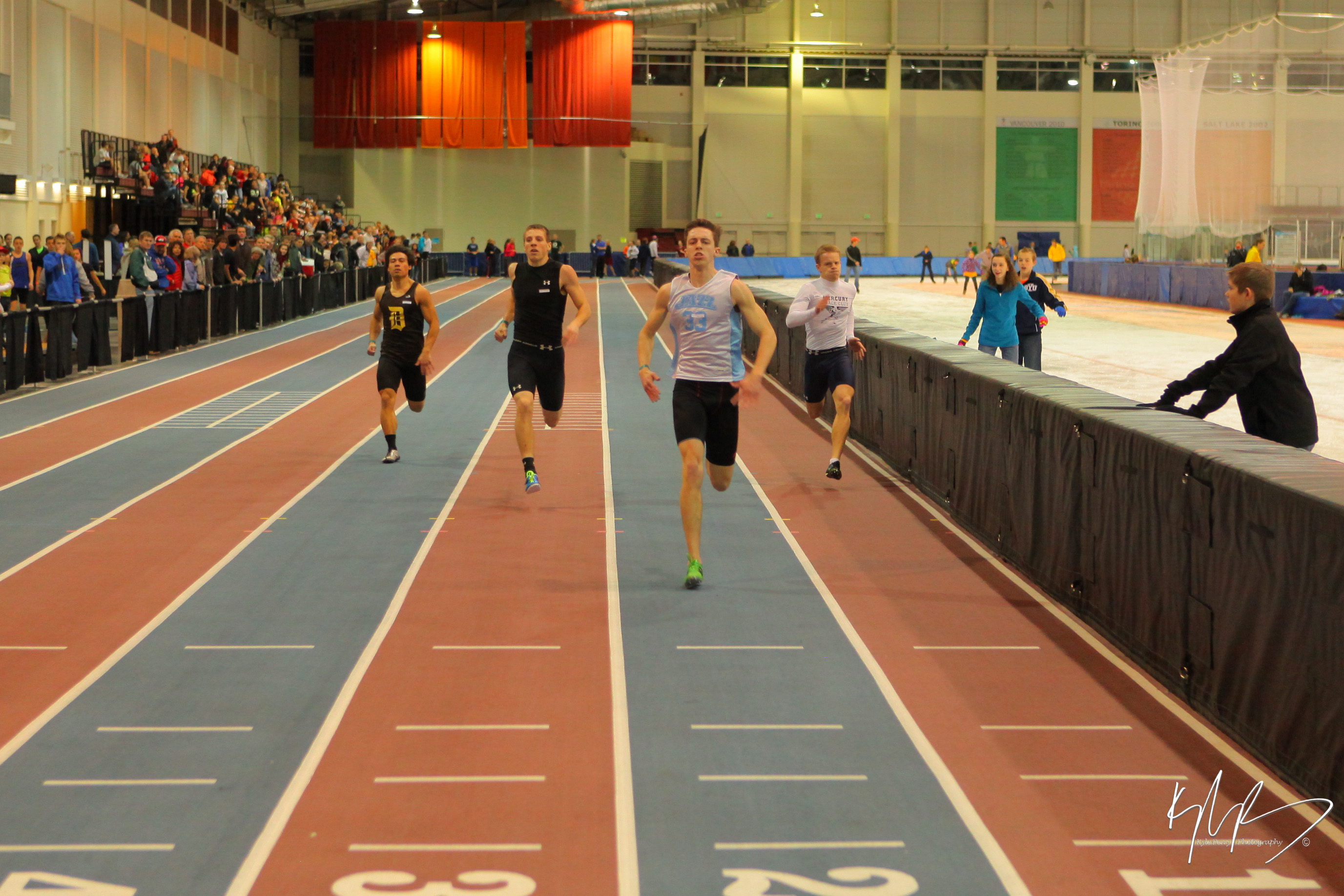 Davis Dominated both the boys and girls team titles. The boys beat out Syracuse 272 to 117 with the girls beating out Northridge 241 to 72.

A breakdown of qualifiers from the meet, event by event

Bailey Carling of Davis High School won the girls 100m dash and qualified for the state meet.  She got a qualifier in the prelims and then bettered her mark in the final with a time of 12.59

Trevor Leavitt of Davis got the win with a time of 22.13, though no one in the finals got a qualifying mark. Cam Dopp of Woods Cross and Nic Edwards of  Layton Christian both got qualifiers in the preliminary rounds.

Laura Kehr of Northridge won the event with a time of 26.57. No qualifiers in this event.

Jacopo Spano won the event in meet record time of 48.92 qualifying for state. Just behind him was Woods Cross teammate Cam Dopp  at 49.42 and Trevor Leavitt of Davis also got a qualifier at 50.06.

Karrie Pead set a new meet record of 58.15 and qualified for state. She was followed by Jill Richardson of Woods Cross.

Cam Dopp of Woods Cross had a great meet, Grabbing a victory and another qualifier in the 110m hurdles. He won in 15.08 followed by Conner Jensen of Bountiful and Jaxson Worthen of Syracuse both qualifying in the process.

Jaxson Worthen of Syracuse came back form his 110 hurdles to win the 300m Hurdles. His time of 39.51 won by nearly 2 full seconds and qualified him for state.

Christine Van Brocklin won the girls 300m Hurdles with a time of 47.25 over Suzanne Robertson of Syracuse. No qualifiers in this event.

Taylor Cox and Ellie Child, fresh off their National Championship in the 4x800, placed first and second in the girls 800m both qualifying for state.  Just behind them was teammate Hannah Albrechtsen.

Davis High Showed their Dominance in the boys 1600m taking 7 of the top 8 spots. Brayden Cromar Won in 4:20, followed by Marcus Lindmeir of Bountiful. Both qualified for state as well as Preston Johnson and Alex Hedquist.

Shea Martinez continued her great senior season by breaking the meet and stadium record in the girls 1600m. Her time of 4:58.42 qualifies for state and won the meet by 23 seconds.

Andrew Tyndall and Trace Arbon of Davis both cleared 12-6.00 in the boys pole vault. The win went to Tyndall on misses, and both qualified for state.

Mallory Ashby cleared 8 feet in the pole vault, winning by 6 inches. Her mark isn’t a qualifying mark and she will have to go a bit higher.

The top 4 boys jumped high enough to make state in the boys high jump, but none of them were close to Marcus Kemp of Layton as he set a stadium record of 6 feet 8 inches. He was followed by Marcus Daley at 6’2”, and Tyler Kendell and Jaxson Worthen both at 6’1”

Marissa Appiah of Woods Cross won the girls high jump with a mark of 5’5”. She qualified and beat out Katie Toole of Viewmont (5’2”) and Tanisha Langston of Davis (5’1”) who both also qualified.

Camille Stringham of Davis won the girls long jump over Eliza Katoa of Layton. Both qualified for state.

Jessica Richardson  of Davis won the girls shot put. She qualified along with Kara Gilbreath of Viewmont and Jordyn Wensel of Woods Cross.

Ben Bracken came back from his shot put win with a winning throw in the Discus. He won by a foot over Nicholas Merriman of Syracuse.

Kaylee Brown of Davis beat out teammate Jessica Richardson by the narrowest of margins. The results show an exact tie of 112 feet 11 inches though the victory was given to Brown. Brenn Flint of Syracuse was 3rd also qualifying.

Jeff Whittaker of Davis won the javelin with a throw of 162’6”. He qualified for state and beat his nearest competitor by 7 feet.

Jordyn Wensel of Woods Cross won the girls javelin with a throw of 108’11”. She beat out Kendall Sargent of  Davis with both getting a qualifying mark.

Davis showed their depth and strength as they won every single relay in both girls and boys. They grabbed 10 relay victories at the meet, with state qualifiers coming in the 4x100 boys and girls, the girls 4x400, and the Sprint medley.